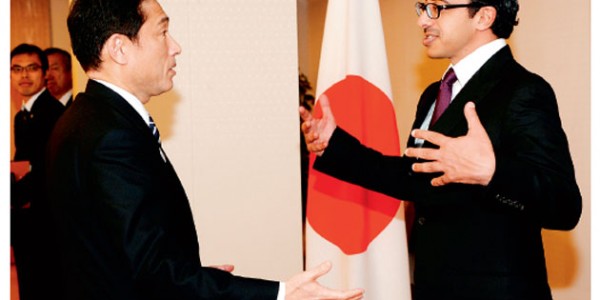 Japan praises UAE’s pro-investment mileu Wam / 23 April 2013 UAE Foreign Minister Shaikh Abdullah bin Zayed Al Nahyan met with Japanese Prime Minister Shinzo Abe here on Monday. Shaikh Abdullah conveyed the regards of His Highness Shaikh Mohammed bin Rashid Al Maktoum, Vice-President and Prime Minister of the UAE and Ruler of Dubai, and General Shaikh Mohammed bin Zayed Al Nahyan, Crown Prince of Abu Dhabi and Deputy Supreme Commander of the UAE Armed Forces, to the Japanese prime minister. In turn, Abe asked Shaikh Abdullah to convey his regards to Shaikh Mohammed bin Rashid and Gen Shaikh Mohammed bin Zayed, expressing his wish that the UAE would enjoy more progress and prosperity. During the meeting, Shaikh Abdullah stressed the importance of strengthening bilateral relations between the UAE and Japan, and the desire of the leaders of both countries to strengthen and diversify the avenues of cooperation. He expressed his wish that Japan would enjoy more progress and prosperity. On his part, Abe praised the environment for investment provided by the UAE which, he said, had made the country one of the world’s main business hubs and destinations for major international companies.  He noted that they use the UAE as a centre from which they launch their operations in other countries in the region. Aber expressed his hope that the UAE would enjoy more success in different fields. The two sides also reviewed the existing ties of cooperation and friendship and ways to reinforce their efforts so as to develop joint economic and trade ties, as well as to encourage investment, advanced industrial projects and other projects in areas of renewable energy and peaceful nuclear energy, which receive proper attention from both countries. The UAE Foreign Minister also met with his Japanese counterpart, Fumio Kishida. During the meeting, the two ministers exchanged views on the progress of cooperation and ways to further develop it in the interests of both countries. They also discussed bilateral relations and ways to enhance them. The two sides also exchanged views on the latest developments at regional and international levels, as well as on a number of issues of mutual interest. Saeed Ali Yousef Al Nowais, UAE Ambassador to Japan, attended the meeting. Taylor Scott International