Gates to the world of books open in Abu Dhabi 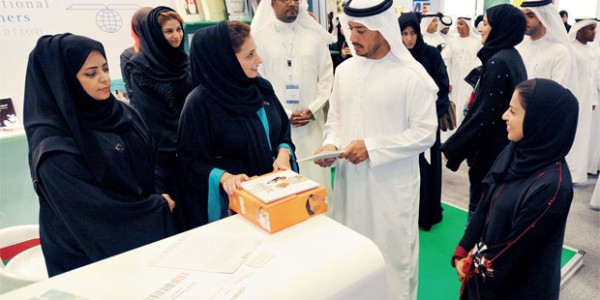 Gates to the world of books open in Abu Dhabi Silvia Radan / 25 April 2013 There was no ribbon cutting involved, but at 11am on Wednesday, Shaikh Tahnoun bin Sultan Al Nahyan, Chairman of the Abu Dhabi Tourism and Culture Authority, walked through the gates of the Abu Dhabi National Exhibition Centre (Adnec) and officially inaugurated the 23rd Abu Dhabi International Book Fair (ADIBF). Shaikh Tahnoun at the opening of the Abu Dhabi International Book Fair at Adnec on Wednesday. — KT photo by Nezar Balout “The 2013 Abu Dhabi International Book Fair brings together, under one roof, influential personalities from literature, poetry and research. Visitors have the opportunity to meet the winners and shortlisted nominees of the Shaikh Zayed Book Award, as well as of the International Prize for Arabic Fiction, browse through literary translations under the Kalimat initiative and benefit from the National Library’s extensive collection of books and publications,” said Shaikh Sultan. While he took time to tour the fair, hundreds of visitors, most of them school children, kept ADIBF crowded right from its first hour of opening. The 1,025 exhibitors may be from as many as 51 countries, but the large majority of books on display are actually in Arabic. Egypt, Lebanon and Syria are well represented, as are Saudi Arabia, Kuwait and Oman. From Sharjah and Fujairah to Abu Dhabi, UAE’s most publishers are present, as well as government organisations. Poetry was indeed the first public discussion at the fair, just half an hour from the opening time! Natasha Trethewey, the 19th US poet laureate was here to read a few of her poems, largely inspired by devastating events in her country and her personal life. “I come from the Deep South and at the time I was born inter-racial marriages were not allowed in Mississippi. Travelling to another state to get married was also not allowed, but that is what my parents did, so they broke two laws to get married,” she said. The story of her parents’ marriage, their travels and the meaning of her name was then recited by Trethewey from her poem “Miscegenation”, written in the “ghazal” form of poetry. “I had all this material in my mind, but didn’t know how to put it together. One day I was driving and was listening to some ghazal. It all came together. I pulled the car over and started writing my verses,” explained Trethewey. Her presence in Abu Dhabi, arranged through the US embassy here, also involves poetry workshops at schools across the country. ADIBF will continue until April 29. silvia@khaleejtimes.com Taylor Scott International