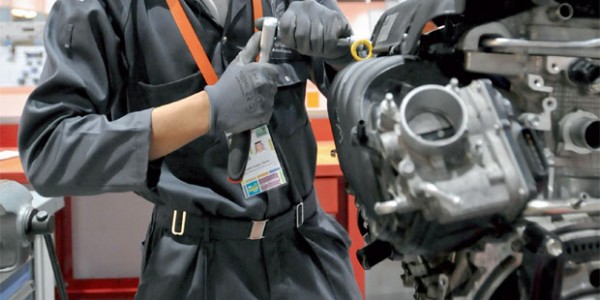 Emirates Skills 2013: No challenge  is too difficult Olivia Olarte-Ulherr / 25 April 2013 Rashid Saeed Obaid was focused. He was concentrating on the task before him — taking the car engine apart and checking for loose parts before assembling it back together. He worked hard and finished the task within two hours, an hour ahead of the allotted time. The 16-year-old from the Secondary Technical School (STS) in Fujairah was one of the 425 students who showcased their adeptness at the Emirates Skills 2013 National Competition on Tuesday. The Emirati youngster was hoping that his agility would win him the prize for the automobile technology. Rashid Obaid works on a car engine. “I have practised hard in my school for this. This is the first time for me to compete and it’s a good experience,” said the teenager who planned on furthering his studies in mechanical engineering. There were 19 categories at the two-day event, and students had to demonstrate their skills based on tasks assigned by the chief experts in their respective categories. Some worked in teams, others individually. Omar Altenaiji and Saeed Khaled Alshamsi from STS Abu Dhabi have teamed up to compete for the mobile robotics. Their first task was to assemble their Lego robot and programme it to guide blind people navigate a supermarket. It was a challenging task, according to the 16-year-olds as the robot has to run on a programme and not on remote control. Saeed Khaled Alshamsi and Omar Altenaiji fix their robot at Emirates Skills National Competition held at Adnec on Tuesday. — KT photos by Nezar Balout “It reads from the ultrasonic sensor which detects objects and avoids it, and all these should be programmed,” said Omar. “And once it’s on the ground, we are not allowed to touch it again,” added Saeed. “It’s kind of difficult. The judge made it challenging but the rules also make it exciting,” Omar stated. They had to do this again on Wednesday, but this time they needed to rebuild the robot as a smart forklift. Their task was to pick-up an object from a loading area and deliver it to a designated destination. On the robotino, another section of robotics, participants were asked to programme an industrial robot to navigate the maze without hitting the walls. Waleed Ali Alblooshi, another 16-year-old, admitted he was not good at this but joined because he was “interested in learning to do something new.” “What we’re trying to do here is combine education and industrial application,” Mohammed Al Shamsi, the chief expert for robotics, pointed out. Al Shamsi is the founder of the Emirates Robotics Club, the first in the UAE. At the fashion technology, chief expert Sophie Wanney, was patiently overseeing the five female competitors from the STS and Applied Technology High School in Al Ain. They were making a traditional ladies’ kandura, and the task was to complete it in eight hours or by the end of competition. Participants were assessed based on several criteria including “how to put the pattern on the fabric, how to cut the pattern. On sewing, if the seams are properly sewn,” explained Wanney. Prior to the competition, a fashion diploma training schedule was held at the Al Jahili Institute of the Abu Dhabi Vocational Education and Training Institute (ADVETI). Out of the 12 ladies, five were chosen to compete at Emirates Skills, said Wanney. Other skills being highlighted at the competition include electrical installations, mechanical engineering design, welding, electronics, IT software solutions, web design, graphic design, web security, jewellery, aircraft maintenance and health and social care. Winners will be chosen from those who completed all the tasks successfully and the fastest. – olivia@khaleejtimes.com Taylor Scott International