Art2Gether: Getting together for art’s sake 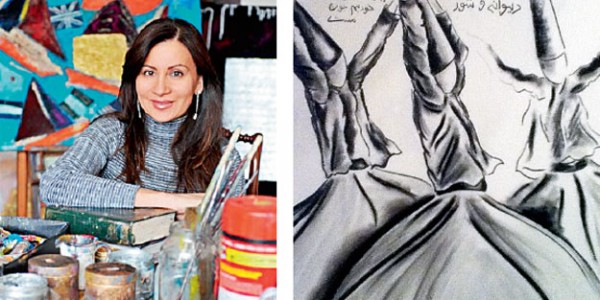 Pakistani artist’s painting to be auctioned by Christie’s to provide hunger relief Dervish Dance for charity Sarah Young An award-winning artist will donate the proceeds of her work to impoverished Pakistanis after her painting is auctioned at Christie’s next month, and hopes her work will continue to spread optimism and change in an intolerant world. Dubai-based Pakistani-British artist Faiza Shaikh’s painting, “Dervish Dance”, was selected by major auction-house Christie’s for their upcoming Contemporary Pakistani Art Now Auction on May 1 at Mina A’Salam, Dubai. Shaikh will donate the proceeds to the World Food Programme (WFP), a branch of the UN, to provide hunger relief in Pakistan. It was a huge honour to have her painting selected, she said. “This is the first such event by Christie’s for Pakistani artists, so it’s very significant for Pakistan.” Pakistani art has been growing in popularity, particularly in the UK, and this represented a great opportunity for Pakistani artists to be shown on an international platform, she said. “There’s a lot of talent in Pakistan but the opportunities are not there.” The painting’s reserve price was $5000 – $6000, but she was hoping it would go for more than that, given the WFP was a “subject very close to (her) heart”. “It’s an honour that one of my paintings will help raise funds for the hungry. “I’ve been involved with a number of charities, and it’s a nice feeling that my works benefit others in many different ways.” The work is part of a series of paintings she is doing influenced by the 13 th -century poet Rumi. Painted last year, her piece depicted three women dancing the dervish, or whirling, dance, and was based on Rumi’s idea of the need to dissolve the ego and not forget our spiritual existence, she said. “He believed dance, music, poetry and art provided a path to get closer to God.” The women’s right hands reach to the sky to ask for God’s mercy, while the left hands reach to the earth to represent all God’s creatures seeking his mercy. The tall hats represent the “tombstone of the ego”, she said. Shaikh’s work, which tries to depict philosophy, politics, poetry and economics on canvas, is recognisable for the rich textures, strong colours and the use of gold and silver leaf scripted with messages from all religions including Buddhist and Sandskrit. “All of my work has some kind of philosophical message. I’ve always believed that art is a way to get through to people, and it’s a good way to share your aspirations. “This (work) is slightly different but all philosophies are similar, focusing on love, peace and devotion. All have a message about getting rid of the ego and being tolerant. The world is lacking tolerance these days.” And despite this lack, and the “troubles going on in the world”, optimism remained a clear theme in her work, she said. “When I speak of optimism, it is that there is hope for a change, and I hope the viewers (of my work) see the same.” Shaikh moved from London to Dubai last year. “I miss London but Dubai has a definite charm — there are lots of major art events here now, great galleries and opportunities for artists.” She said she was currently finalising an agreement to show her works in a major hotel chain, “and this (was) the kind of opportunity you get in Dubai that is not elsewhere.” The not-for-profit auction is being held under the patronage of Shaikh Nahyan bin Mubarak Al Nahyan, Minister of Culture, Youth and Community Development, at the Mina A’Salam Hotel on May 1. The collection will include 55 pieces from both established masters and emerging Pakistani artists, including Jamil Naqsh, Iqbal Medhi, Gulgee, Shakir Ali, Shahid Jamal, Sadequain, Bashir Mirza and Ahmed Parveez. The works, donated by artists, private collectors and art galleries, can be viewed on April 30. sarah@khaleejtimes.com Taylor Scott International