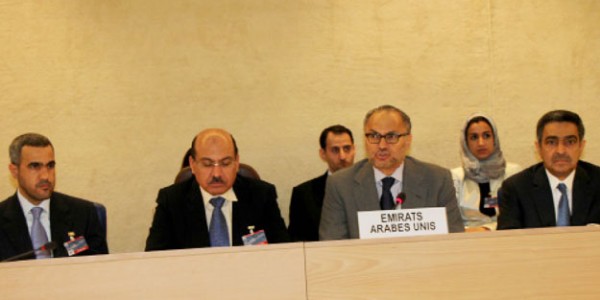 UN rights body adopts review report on UAE (Wam) / 8 June 2013 The UN Human Rights Council successfully adopted the Universal Periodic Review (UPR) report on the United Arab Emirates in Geneva on Friday, marking the conclusion of the UAE’s participation in the current cycle of the UPR. Minister of State for Foreign Affairs Dr Anwar Mohammed Gargash announced his country fully accepted 100 recommendations, partially accepted or noted 61 recommendations and rejected 19 recommendations made by UN member states during the UPR session in January 2013. Among the accepted recommendations is the decision by the UAE to establish a national human rights institution. Dr Anwar mohammed Gargash and the UAE delegation at the Geneva meeting. — Wam Dr Gargash noted with satisfaction that the council had recognised the significant progress achieved by the UAE in enhancing human rights protection and had applauded the UAE’s national process in compiling the human rights report. Dr Gargash thanked all those present for their valuable contributions and was pleased to note the encouraging remarks made in the majority of interventions as the UAE progresses on its path to peace and prosperity. In his statement to the Human Rights Council’s concluding session to adopt the UAE’s report, Dr Gargash emphasised the UAE’s commitment to the UPR process as a tool to support and enhance national capacity building and improve human rights amongst nations. “Our domestic and international efforts stem from our national values and cultural heritage, which enshrine justice, tolerance, equality, and international responsibility. Respect for human rights and fundamental freedoms is an essential component of our principles, and we are proud of the progress we have made in improving the quality of life of our citizens,” he declared In addition to these values underpinning the UAE’s progress on human rights, he especially noted the continued solid improvement of the labour environment in the legislative and executive field and committed that the UAE will continue on this path of progressively enhancing labour conditions. Additionally, he emphasised the empowerment of women as a major objective in building a modern and progressive society with confidence in the future. In December 2012, the UAE’s Cabinet issued a decree to promote the participation of women on the boards of government agencies and companies, making the UAE the second country in the world with mandatory female presence in board rooms, and the first in the Arab region. The UAE will also serve on the Executive Board of UN Women until 2015. Furthermore, Dr Gargash emphasised that cultural and religious tolerance continues to be a hallmark of the UAE’s agenda and that this is an essential component in building a fair and attractive society. Dr Gargash subsequently stressed that the UAE will continue to protect its public security and stability in full compliance with the applicable legal standards of the country. He said: “Any violations of national laws will be investigated and dealt with in accordance with the laws of our country, and measures provided for by the law will be taken in case of violations.” Dr Gargash also highlighted the pioneering role of the UAE in combating human trafficking in the region, as he announced that the UAE became a formal member of the Bali Process in April 2013. Moreover, he discussed the UAE’s efforts to build institutional capacity within government departments to promote human rights, and to create improved legal protection for the expatriate labour force. In a bid to improve the protection of human rights across the world, once every four years the Human Rights Council holds a public review of each of the 193 member states of the UN to examine where they are doing well and where they can improve. This was the second such review process for the UAE since the UPR was instituted in 2006. With the adoption of thel UPR report, the UAE’s Standing Committee on the Universal Periodic Review will now strive to implement across the government the recommendations that have been accepted and continue to improve its protection and promotion of human rights. Taylor Scott International