Global netizens worried over US spying 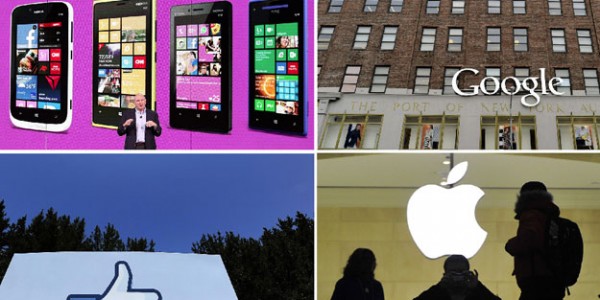 Global netizens worried over US spying (AP) / 8 June 2013 News that the US government has been snooping on Internet users worldwide came as little surprise to global netizens, who said they have few expectations of online privacy as governments increasingly monitor people’s digital lives, often with Internet companies’ acquiescence. Privacy activists concerned over the US National Security Agency’s selective monitoring of Internet traffic called on people to take measures to better protect their digital data ranging from emails to photos to social network posts. But most people eschew encryption and other privacy tools and seemed resigned to the open book their online lives have become. “It doesn’t surprise me one bit. They’ve been doing it for years,” said Jamie Griffiths, a 26-year-old architect working on his laptop in a London cafe. “I wouldn’t send anything via email that I wouldn’t want a third party to read.” This combination photo shows (clockwise from top L) Microsoft CEO Steve Ballmer at the Bill Graham Auditorium in San Francisco; Google’s headquarters on 8th Avenue in New York; people walking past the Apple Store at Grand Central Terminal in New York; the “Like” icon at the Facebook main campus in Menlo Park, California. US spies are secretly tapping into servers of nine Internet giants including Apple, Facebook, Microsoft and Google in a vast anti-terror sweep targeting foreigners, reports said on June 7, 2013. AFP From Baghdad, to Bogota, Colombia, many said they already carefully censor what they write online and assume governments are regularly spying on online activity, be it as part of global counter-terrorism or domestic surveillance efforts. “The social networks and email have always been vulnerable because tech-savvy people know how to penetrate them,” said Teolindo Acosa, a 34-year-old education student at Venezuela’s Universidad Central who was leaving a cybercafe in Caracas. Leaked confidential documents show the NSA and FBI have been sifting through personal data by directly accessing the US-based servers of Google, Facebook, Microsoft, AOL, Skype, PalTalk, Apple and YouTube. Following Thursday’s revelation, US President Barack Obama said Friday that the surveillance did not “target” US citizens or others living in the US — which does not mean their communications were not caught up in the dragnet. But that didn’t dampen the outrage of people who resent what they consider Washington’s self-anointed role as the world’s policeman. “To the United States, everyone is suspicious, even the pope!” said leftist Colombian Sen. Alexander Lopez. “Everyone is under observation these days and this should be taken up by the United Nations.” Lopez said he has no plans to close his Google and Microsoft email accounts. He figures he’ll be spied on no matter what he does. The revelation of global data vacuuming could hurt US technology companies if Internet users become disillusioned and abandon them in favor of homegrown alternatives that offer greater security. US privacy activist Christopher Soghoian said he finds it “insane” that so many politicians outside the United States use Google gmail accounts. “This has given the NSA an advantage over every other intelligence system in the world. The Americans don’t have to hack as much, because everyone in the world sends their data to American companies,” he said. Hossam El Hamalawy, a blogger with Egypt’s Revolutionary Socialists, one of the Egyptian groups that helped spearhead the 2011 uprising, said the dearth of locally developed Web tools means many around the world are simply stuck with US sites, even if they know the government is monitoring them. “The problem is that there is no alternative,” he said. “If you don’t use Facebook, what is the alternative social network available for the Internet user who is not an IT geek?” Soghoian predicted an increasing push by governments and companies in Europe in particular, where privacy has been a much bigger issue for voters than in the United States, away from storing data in US-based server farms. Indeed, under US law it is not illegal for the NSA to collect information on foreigners. The disclosure of the NSA data-vacuuming program known as PRISM is only the latest “of many US government programs created to infringe on personal freedoms,” said Carlos Affonso Pereira de Souza, a technology policy professor at FGV think tank in Rio de Janeiro. Going back well into the 20 th century, the United States, Britain, Canada, Australia and New Zealand ran a secret satellite communications interception network that became known as Echelon and searched information including telexes, faxes and emails, according to experts including US journalist James Bamford. The system was the subject of a 2001 European Parliament inquiry. According to a UN report released this week, such surveillance has been on a global upsurge with governments increasingly tapping into online personal data and even discouraging online anonymity by passing laws prohibiting it. The UN report said such activity has been expanding as technology advances, and that countries should prioritize protecting people’s online rights. “In order to meet their human rights obligations, States must ensure that the rights to freedom of expression and privacy are at the heart of their communications surveillance frameworks,” the report reads. Its author, Guatemalan Frank La Rue, calls for legal standards to ensure “privacy, security and anonymity of communications” to protect people including journalists, human rights defenders and whistleblowers. Civil libertarians in the United States were much more upset about a different revelation published Wednesday, that the NSA has been collecting the phone records including the calls, numbers, times and duration of all US citizen customers of the telecommunications giant Verizon. Taylor Scott International