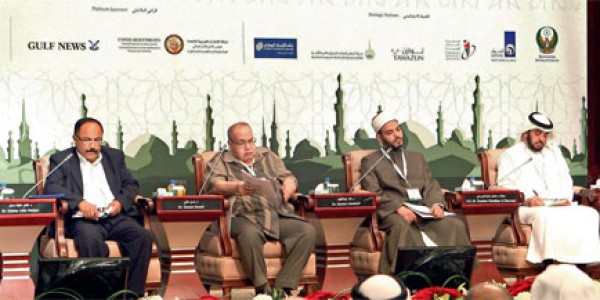 Thought leader: Spread Arab culture of moderate Islam (Wam) / 28 May 2013 “The Arab-Islamic culture of moderation is in a real crisis amid the flood of ideological militancy and extremism,” Dr Jamal Sanad Al-Suwaidi, director-general of the Emirates Centre for Strategic Studies and Research (ECSSR), said. “There is no way out or alternative but to support and enhance this culture of moderation, not only so that our Arab and Islamic nations can overcome these difficult historical circumstances, but also in order to protect future generations from the spread of militancy and extremist ideology, he told the opening session of a conference on ‘The Future of Arab-Islamic Culture’. The two-day conference will deliberate on ‘Analytical View of the General Currents in Islamic Thought,’ ‘Islamic Thought and the Arab Renaissance Movement’, ‘Movements in Contemporary Islamic Political Thought: The Muslim Brotherhood’. The Closing Discussion Panel will tackle ‘Experiences of Political Islam in Power: Visions and Ideas.’ He stated: “In recent years, the Arab region has witnessed obvious and significant political transformations, the result of which has been that religious groups and movements stand at the forefront of politics in several countries. It stands to reason that such shifts have specific implications and consequences worthy of close research and study, particularly in the light of Islam itself becoming a subject of escalating political argument and controversy in conflicts that will undoubtedly yield adverse consequences. “Such consequences will not be limited to the stability of Arab communities in the current moment, but may also spread to affect the image of Islam that has prevailed for centuries, namely its unique characteristics of tolerance and acceptance of others.”  He added: “Observance of the vast overlap between religion and politics in the daily practices of certain Islamic groups and movements shows the systematic distortion of Islam through the adoption of slogans and media coverage, ostensibly to defend religion. However, their essence and goals are political and aim for authority, power and influence by exploiting certain religious perceptions that utilise the innate tendency of Arab people towards religiosity, in order to fulfill their aims. “Therefore, we see that the Arab world is in a dilemma, which some movements and groups try to justify and interpret in a historical and religious context. This also leads us to struggle against a close-minded religious discourse that paralyses the potential of our youth, closes the window of hope and throws the destiny of the Arab world into the abyss.” The Director-General of the ECSSR stressed that the only way to tackle the several problems Arab countries are facing, at present, is holding on to moderate Islam to strike a balance between material gain, spirituality and the preservation of cultural identity without falling into the traps of excess, negligence, extremism or violence. The proper understanding of Islam will rid the Arab and Islamic world of its deterioration and fortify societies against extremism, he said. He added: “We fully trust that moderate Islamic culture is immune from fundamentalism, extremism and all attempts at hijacking of Islam by those claiming its exclusive representation. This trust stems from the existence of well-established religious institutions which protect moderate Islamic culture, preserve the true identity of Islam, and aim to spread it worldwide. The most prominent of these institutions is Al Azhar, the biggest religious institution in the Arab and Islamic world. He concluded by saying: “Our aim in this conference is not to criticise practices that have been rejected by Islamic societies. Rather, our goal is to provide a driving force for the efforts aimed at developing the Arab nation on the basis of sound Islamic thought and introducing the true image of Islam, thereby replacing its image presented by some groups as a closed, fanatical religion that rejects the other.   Taylor Scott International