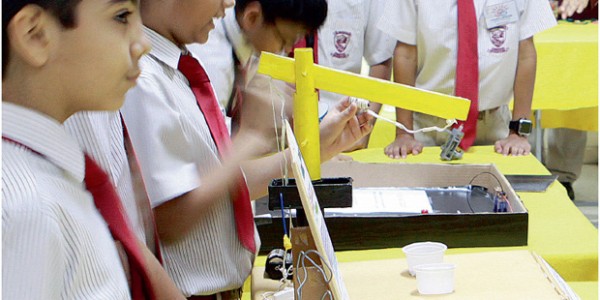 New standards for CBSE schools Dhanusha Gokulan / 23 April 2013 Will all schools following the Indian Central Board of Secondary Education (CBSE) eventually have to undergo a process of transition into the new CBSE-i syllabus? Maybe, yes. Officials from the Indian board have suggested that as part of their ongoing quality assurance programme, every school affiliated to the Indian board, will eventually have to let go of the current system and adapt to the ‘text-book free, interactive learning’ curriculum. Officials also confirmed that all schools across the globe, affiliated to the CBSE, would have to undergo an accreditation process subscribed by the board in the next three years. If the schools do not come up to the prescribed standards in the next five years, they could face disaffiliation from the board. Speaking to media persons at the fourth annual CBSE-i Teachers Training Programme hosted by The Millennium School, Dubai, Dr Sadhana Parasher, Director of Academic Research and Training, CBSE said the process would be made mandatory for all CBSE-affiliated schools. The director explained that eventually all CBSE affiliated schools will have to adapt to the CBSE-i curriculum, which only comes as a means to raise the standards of education. “There are many parallel processes going on within the CBSE and there is something called accreditation of schools that we have introduced. The accreditation comes as a part of quality assurance. Once the accreditation of all CBSE schools is complete, there will have to be some kind of raising the bar in terms of quality. Then, we will look at the transition from CBSE to CBSE-i,” said Dr Parashar. “The process has already been implemented and this year CBSE is going to take a tough stance in accreditation of schools. Twelve agencies are working with us on this.” CBSE-i fee structure Since the curriculum demands more in terms of infrastructure, the fees in CBSE-i schools are slightly higher than the fee structure in CBSE schools. Clarifying doubts on the claims of the higher fee structure for the CBSE-i curriculum, Dr Parasher said: “Every CBSE-i school will have to sign a Memorandum of Understanding (MoU) with the board. One of the clauses of the MOU is that the fee charged to the students should be in consultation with the parent body. CBSE cannot get into defining the fee because there are too many types of schools that we are affiliated to. But schools will be allowed to charge fees only with the consent of the parent body.” Syllabus Last year, a few schools in Dubai had discontinued the CBSE-i curriculum stating that there was lack of proper study material. Dr Parashar clarified that all study material, for both teachers and students, has been made available online. Under the CBSE-i curriculum, all learning content is divided into student’s manual and teacher’s manual. “Student manuals are not as content-heavy as the teachers’ manual, but they have several worksheets,” said Dr Parashar. Other experts stressed that the syllabus is not prescriptive, but indicative in nature. “After the introduction of the CBSE-i syllabus, we realised that the parents definitely want something more. Indian parents are very involved with the education of their kids. We don’t want to give them complete textbooks, but students will be provided with student modules, which are worksheets. However, the detailed content is available in the teachers manual,” said Parashar. Sixteen schools, of which eleven were from the GEMS group, took part in the workshop. dhanusha@khaleejtimes.com Taylor Scott International