Learn always and take Dubai with you, students told 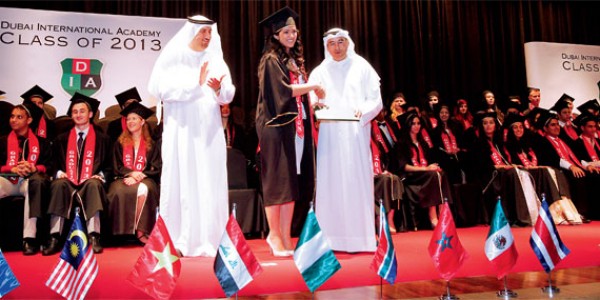 Learn always and take Dubai with you, students told Sarah Young / 1 June 2013 The need for lifelong learning and to connect with others in order to secure a better future was the message to students graduating from the Dubai International Academy. The academy’s fifth cohort of 105 students from 29 different countries graduated on Thursday evening at the American University of Dubai auditorium. Mohamed Ali Alabbar presenting the certificate to a student, as Abdul Rahman Nasser, executive Director for customer relations at the Knowledge and Human Development Authority, and other graduates look on during the ceremony at Dubai International Academy. — KT photo by Mukesh Kamal Chief guest Mohamed Ali Alabbar, chairman of Emaar and the Dubai Events Council, told students they were entering the world at a “very interesting moment of time on earth — a moment filled with optimism and positivity”. The fact students had received more than 300 admissions across 16 countries, and 11 scholarships, showed the quality of their education and their potential — but he encouraged them not to forget their “base” and that they had come from Dubai. “Take the way of life, the way of being in this incredible city everywhere you go. It’s very rare anywhere on earth any student or individual will be able to live, play, learn and create friendships in an environment with over 200 nationalities interacting so positively.” He encouraged them to be “proof” to the rest of the world that they came from such a place where different religions, languages, and cultures could coexist in harmony. The future of the world depended on what they did, and they should never stop challenging things, or learning, he said. “The environment changes every second of the day so your knowledge (becomes) null and void… (but) if you challenge and learn all the time you will be unstoppable.” American University of Dubai president Dr Lance de Masi also told students continuous learning was more important than ever now. The 21 st century had gone “topsy-turvy”, but one thing was certain: “human destiny depends on education”. Half of what students learnt today would no longer be true in 20 years, and at least half of what they would know in 20 years had not yet been discovered. However, just as a car was nothing without petrol, knowledge was nothing without character — and without a conciousness of something bigger than each individual, he reminded them. “Each time you share with your fellow man a specific strength you possess, you build a sense of community necessary to keep the planet turning…without connectedness, globalisation is a sham.” He encouraged the students not to be afraid of their potential, but to “live from the inside out, keep learning, look every fellow man in the face, and use your education to serve this world well”. This was the first year students had been admitted to Princeton in the US, and Cambridge in the UK, and also the first year in which two females — Xanita Saayman, 17, and Sana Rizvi, 18 — had been made valedictorian. Both passionate about the sciences, Saayman will be studying biochemistry in Canada next year, with the aim of moving into pharmaceutical or genetic research, while Rizvi will be studying medicine in the United Kingdom. Saayman said most of their cohort would study overseas, mainly in the US and Canada. The academy had prepared them well for independent study, and while they would miss the city they had lived in for four years, they were looking forward to what changes the future held, she said. sarah@khaleejtimes.com Taylor Scott International