Focus on relations between UAE, France 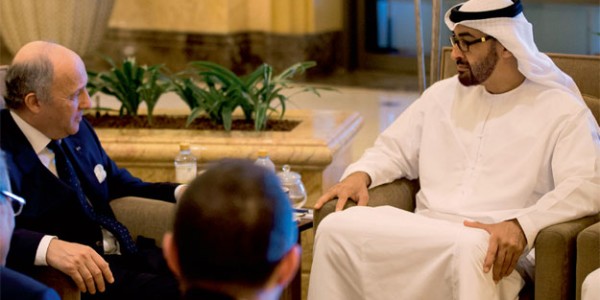 Focus on relations between UAE, France (Wam) / 27 May 2013 General Shaikh Mohammed bin Zayed Al Nahyan, Crown Prince of Abu Dhabi and Deputy Supreme Commander of the UAE Armed Forces met French Foreign Minister, Laurent Fabius on Sunday. The Foreign Minister is on a visit to the UAE. At the meeting at the Emirates Palace, Gen Shaikh Mohammed and Fabius discussed the strategic relations between the UAE and France and ways to promote and strengthen them in all spheres in the service of their common interests.  They reviewed the outstanding relations and the level of cooperation and coordination between the two countries, and the progress these relations have made in all spheres, in culture and education in particular. The two sides discussed the latest regional and international developments at the meeting today. They also exchanged views on matters of common interest. Mohammed Mubarak Al Mazrouie, Undersecretary of the Court of the Crown Prince, and Alain Azouaou, the French Ambassador to the UAE attended the meeting.  Taylor Scott International