Economy to benefit as Enoc and Eppco cut diesel prices 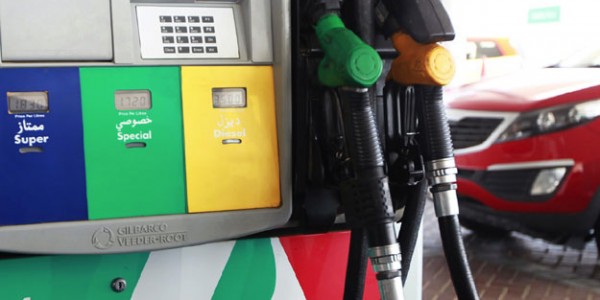 Economy to benefit as Enoc and Eppco cut diesel prices Amanda Fisher / 2 June 2013 Dubai’s transport sector is in line for a boon with expectations savings could be passed on to consumers, after the emirate’s petrol stations announced a 20 fil reduction per litre of diesel — though costs in other parts of the country remain much lower. Emirates National Oil Company announced the price of diesel at its more than 100 Enoc and Eppco petrol stations would drop from Dh3.7 a litre to Dh3.5, effective from Saturday. An Al Khail Road pump showing the revised price. KT photo by Rahul Gajjar The prices of both petrol and diesel in the country are heavily subsidised, with diesel in Abu Dhabi and Al Ain Adnoc petrol stations retailing for Dh2.35 a litre. Prices were at a record Dh4.56 per litre in 2008, during a volatile period when diesel prices fluctuated heavily. However, the price has been climbing steadily with little respite ever since, with transport companies such as Dubai-based Euro Movers International feeling the pinch, according to director Khurram Abdulla. “The last five years the fuel costs have been going up, so any reduction is obviously very welcome, so it will have a positive impact on our bottom line.” Abdulla said his company spent about half-a-million dirhams each year on fuel for their local and international transport companies, which relied on seven vans and trucks using diesel. “I think this is the first time it’s actualy coming down. Normally we’re used to it just going up.” He said he was optimistic the price reduction would remain in place for some time, in which case the company could look to pass on savings to customers. “It’s very competitive (in) our industry and Dubai in general is very competitive, so whatever we can do to make ourselves more competitive (we will). We’ll definitely pass that on…We’ll wait for a month to see how much we can pass on…we might be able at the end of the month to see a reduction of five per cent,” Abdulla said after doing a few calculations based on the new lowered price. While fuel costs only amounted to about 10 per cent of the company’s overall costs, Abdulla said the company would hope to see secondary savings in their international arm, if shipping companies they contracted also passed the savings from the lowered international price of diesel. Enoc retail managing director Burhan Al Hashemi said Enoc had revised the price of diesel in line with the international price trends for crude and refined products. “The recent decline in international prices has provided us an ideal window of opportunity to pass on the price benefits to diesel users. The price decrease will have a positive impact on the overall economy, given the vital role that diesel plays in the logistics sector,” he said in a statement. Al Hashemi said the price revision should benefit the manufacturing sector and other supply companies with large fleets that use diesel. However, economic advisers Nasser Saidi and Associates founder Nasser Saidi said the price reduction would have just a minor impact. “Diesel, of course, is important for transport so to that extent it will lower the cost…and it will effectively mean at a consumer level, although to a very marginal level, (product prices) will decline.” However, that needed to be put “in perspective”. “Transport costs are important but not the main determinate of consumer prices…at best this will have a marginal effect. Clearly the people who use diesel in the cars will see the effect but that’s a minority of people.” Saidi also warned the reduction would be temporary as international prices would rise again. He attributed the fall in global prices to seasonal patterns, with the diesel used for heating major northern hemisphere markets of the United States and Europe not needed as they headed into summer. Saidi put out a plea to the government to instead of passing on the “negligible” savings to consumers, that they be reinvested in the sector to develop renewable energy. amanda@khaleejtimes.com Taylor Scott International