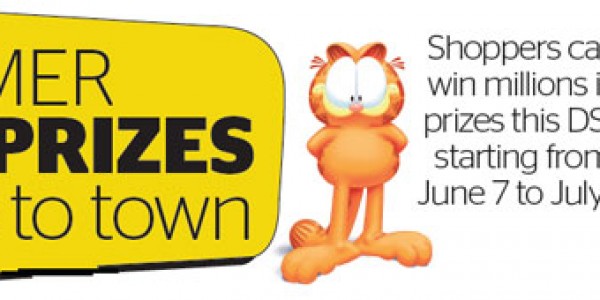 Dubai Summer Surprises come to town Staff Reporter / 7 June 2013 Starting today, the Dubai Summer Surprises (DSS) and Modhesh are back, giving shoppers an opportunity to win Dh250,000 weekly, and up to Dh1 million in prizes. Along with the Dh1 million in cash and shopping vouchers, eight BMW cars will be given away to 17 winners for DSS. As part of the campaign, shoppers are invited to three Dubai malls — Deira City Centre, Mall of the Emirates and Mirdif City Centre. The festival that will run until July 7, will feature non-stop programmes for family entertainment at the malls that will remain open from 10am upto midnight on weekdays and 10am – 1am on weekends. At the Mall of the Emirates, children can watch the popular ‘Bananas in Pyjamas’ pair perform live, inaugurating the first five days of Dubai Summer Surprises. The characters will sing, dance and interact in a show for the entire family. Adding to the excitement, the Xtreme Festival is coming to town complete with trampolines, stilt walkers, jugglers and acrobats, all of whom will be performing for visitors. Starting June 7, every Sunday to Tuesday, the circus will show off their tricks in three unique 20 minute shows, Xtreme Festival, Bed Time Stories, and Treasure Box. Performances will be held at 4.30pm, 6pm and 8.30pm Thursday, Friday and Saturday; and 4:30pm and 7pm Sunday, Tuesday and Wednesday — promising a chance for everyone to witness some world-class stunts. Deira City Centre and Mirdif City Centre will bring one of the more-loved cartoon characters, Garfield to the malls. Performing his Happy Birthday to Me stage show, the audience will be invited to participate in a musical celebration. Garfield will start off at Mirdif City Centre from June 7 to 13, before heading to Deira City Centre from June 18 to 24. Shoppers will be transported into a jungle at Mirdif City Centre during the Jungle Circus, that will feature 40 African acrobats, aerial artists, contortionists, musicians and more performing acts of energy, flexibility and strength. From June 14 to 19, the Jungle Circus will have three 30 to 45 minute shows daily. As a special weekend treat, the Smurfs are coming to indoor family entertainment centre, Playnation, for an exclusive show and meet-and-greet with young fans. Starting June 22, the Smurf family will greet children Thursday through Saturday, until July 7. Another character known as ‘the sweetest girl around’, Strawberry Shortcake, will make a special appearance at Deira City Centre from July 1 to 7. Miss Shortcake will perform an interactive show for families to enjoy. Additional roaming entertainment will also take place throughout the DSS to keep families entertained all month long. Dh5m for three seasons Dubai Shopping Malls Group (DSMG), the umbrella organisation of shopping malls in Dubai, unveiled its promotion for Summer is Dubai 2013. This is the sixteenth year that the group has partnered with Dubai Festival and Retail Establishment (DFRE) as a key sponsor to roll out blockbuster shopping fiesta among its participating malls offering winners a chance to win Dh5 million. Majid Al Ghurair, Chairman of DSMG, commented: “We are proud to continue our association with DFRE through a spectacular promotion that complements the three seasons of summer is Dubai 2013. Raffle promotions have always attracted customers and our commitment to offer exciting promotions and winning opportunities is in keeping with the mandate to re-energise the mall industry and trade. As an umbrella organisation of shopping malls we aim at offering shoppers innovative ways to win exciting prizes while enjoying their shopping experience and we are confident that the unique promotion this year will give additional opportunities for shoppers to win.” Positioned across three seasons, the raffle promotion is phased across DSS (from June 7 to July 7), Eid (August 1-14) and End of Season (August 15 – September 7). All shoppers are entitled to one raffle coupon for every Dh200 spent at the participating malls. On the last day of DSMG’s mainstream DSS promotion, one mega winner will also receive Dh100,000 in cash plus Dh100,000 in shopping vouchers. The raffle draws are scheduled to be held on June 13, 20, 27 and July 10. The Eid promotion will offer shoppers an opportunity to win a total of Dh1 million worth of gold and Dh1 million worth of scratch and win gift vouchers. The raffle draws for winning gold are scheduled for August 12, 13 and 14. The ‘End of Season’ promotion will offer a mega winning of Dh1 million and the millionaire raffle draw is scheduled for September 7. The mall fraternity participating in the campaign include Al Bustan Centre, Al Ghurair Centre, Almulla Plaza, Arabian Centre, Al Barsha Mall, Bin Sougat Centre, Burjuman, Century Mall, Dubai Marina Mall, Dubai Outlet Mall, Etihad Mall, Ibn Battuta Mall, Lamcy Plaza, Mazaya Shopping Centre, Oasis Centre, Reef Mall and Time Square Centre. news@khaleejtimes.com Taylor Scott International