Circuit Factory: On the circuit to fitness 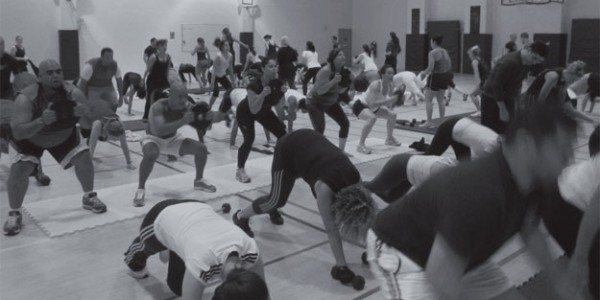 On the circuit to fitness Nivriti Butalia / 8 June 2013 ‘Cooler than Cavalli’, ‘The Challenge’, ‘Male Breast Awareness programme’, ‘Time to Speak the Truth’, ‘Social life? Please. I work out’ are all headers on the website of Circuit Factory, a large gym equipment-packed tin-roofed warehouse in Al Quoz Industrial Area, where there exist equal measures of dust and sweat. The tagline of The Circuit Factory, at least on their Facebook page and website, is ‘Most Powerful Weight Loss System In The Sandpit Babes’ (sic). Fitness enthusiasts work out at Circuit Factory in Al Quoz. — Supplied photo You could call it a gymnasium. But that might be similar to calling the Burj Khalifa a skyscraper — there is the risk of underestimation as scales aren’t quite gauged. Owned by the Al Tayer group, and with 3,000 members, Circuit Factory is a towel-toting community of fitness enthusiasts, who by their mere attendance are committed to pushing their bodies to the outer reaches of its comfort zone, and then tipping over. They have a mission, part of which is “to transform people’s lives by proving that great health and a great body is neither complicated nor inaccessible”. Upon showing up, a trainer very quickly writes your name on a sheet of paper and you’re made to sign a disclaimer that states you have no medical issues, and which presumably absolves the guys at the warehouse of any responsibility. Broken bones, stiffened mus cles, shattered nerves – all at your own risk.  Perhaps the piece of paper should be more than perfunctorily glanced at. But the tempo is bustling. All around you people in various kinds of gym-gear are making a bee line for one end of the tin shed. Everyone is assembling. There must be two dozen people at a start line for what seems like a race start. Trainers are shouting. There is a nervous chaos – unless that’s what they call adrenalin. It’s a run alright — a kilometre and a half outside, cutting past other warehouses and stretches of dusty roads, traversing the less-frequented roads. There are fellow circuit trainers, much more athletic, all whizzing past. The sound and fury of rubber-soled footsteps pervades your ears. Trainers yell ‘Go! Go! Go!’ amid other shorthand codes of encouragement. You feel any minute now Nicholas Cage is going to swoop down from a loud hovering chopper, dangle down a rope ladder, ask for your hand and rescue you  or that is, at least, the prayer. The run is only the first bit. And apparently there are variations in every class. Once you finish running the seemingly interminable stretch of dust-road, it’s back into the warehouse for more muscle-torture. Hamid, the trainer, says after the day’s training: “The first day is the hardest.” He also provides the assurance, the careful distinction, that no, it doesn’t get easier, it gets better. You tell Hamid the purpose of your attendance is a battle against belly fat. He tosses you a circuit-factory aphorism: weightloss is 80 per cent food, 20 per cent exercise. The run is succeeded by a circuit — repetitions of squats and strides and jumps and thrusts. ‘Burpees’( squat thrusts) seems to be a favourite. By the second repetition, it’s heartening to see most fellow trainees dissolve into puddles of sweat. People’s sizes vary. The fat and the marginally fat trot –if not alongside, at least somewhere in the orbit of the gazelle-like Adonis figures who seem to be not just surviving, but doing so with a stoic, sculpted grace. People you both dislike and yearn to be. Circuit Training is not everyone’s cup of tea, but the results show. The trainers assure you that if you keep at it, you’ll become one of them in no time – a top of the class figure, soaked-in-sweat with calves of steel. For more info see: circuitfactory.ae/classes.php nivriti@khaleejtimes.com Taylor Scott International