Youngsters gearing up for Earth Week 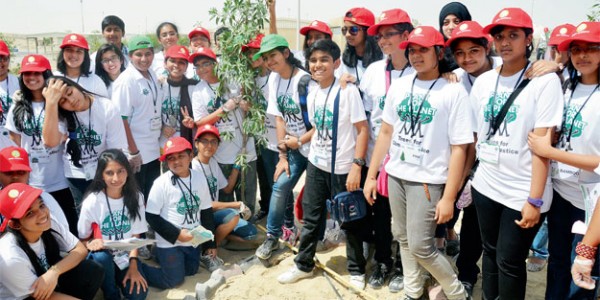 Youngsters gearing up for Earth Week Dhanusha Gokulan / 21 April 2013 In recent times, youngsters in the country have been taking conservation of the environment very seriously, leaving behind a trail of inspiration for the older generation. Students participating in a tree planting ceremony at a landfill in Jebel Ali on Saturday. — Supplied photos UAE youth have geared themselves up to celebrate the start of Earth Week in the UAE leading up to Monday’s Earth Day 2013, and youngsters as young as 12-years-old are becoming increasingly environmentally-conscious. Take 12-year-old Kehkashan Basu for example. A student at the Deira International School, Basu won a UN award and was the youngest delegate in Rio+20 — a United Nations conference on Sustainable Development — and is engaged for Plant-for-the-Planet. “Being born on World Environment Day, I feel that I am pre-ordained to be an eco-warrior. My objective is to take a leadership role in spreading awareness about conservation in my school and community and also be a role model by practicing the tenets of conservation,” Basu said. After being chosen as the Climate Justice Ambassador during the Rio+20, she, in turn, initiated 64 students as Climate Justice Ambassadors in UAE academy. Some of these climate justice ambassadors — who are also members of Basu’s youth organisation, Green Hope UAE — were instrumental in conducting a recent tree-planting event in the UAE. The turnout of the event exceeded expectations: “Green Hope UAE has now inducted over 150 climate justice ambassadors in the UAE and vows to carry on its mission of creating awareness about climate justice by spreading its message with the…slogan ‘Stop Talking and Start Planting’,” she said. Another student-run organisation actively partaking in raising environmental consciousness is SynergY. On Saturday, April 20, SynergY also organised a ‘Plant-for-the-Planet Academy’ in a Landfill in Jebel Ali, Dubai. Plant-for-the-Planet is a global children’s initiative through which children generate awareness among other children by enlightening them about climate crisis and environmental protection, urging them to take action by planting more and more trees. The event was supported by Dubai Municipality Waste Management Department director Abdul Majeed Saifaie, who encouraged SynergY to plant trees at the Landfill with Purpose — a site in Jebel Ali. Whilse on the visit, the youths learnt about the need for landfills. Youth and children spanning a dozen schools and institutions conducted the day-long event giving the young generation a chance to plant trees, learn about climate change, and discuss shaping the Green Economy initiative of Dubai. Referring to the careful consideration needed when planning such an event, SynergY member and student Sayyeda Zahra said: “Events like this cannot happen overnight. The wheels start rolling weeks ago. It requires planning and a bird’s eye for detail.” SynergY spokesperson Muskaan Sharma said the support along the way made the planting initiative a success: “(We had) support from Super Galvanising Dubai and Green Creations who arranged and assisted in digging the pits two days in advance to facilitate effective planting at the site. The encouragement and support was further strengthened, as the organisation shared responsibility of arranging a special watering pipeline to the site so as to ensure the survival rate of these trees.” Speaking passionately about the work of SynergY, Founder and Chairperson Simran Vedvyas said: “In a Plant-for-the-Planet Academy, children and youth demonstrate that we will not accept the climate crisis, and that we wish to take responsibility, at a global level, to effect change and improve the future of our country and the world. As part of a world network of global citizens, we, the children and youth, are able to achieve great things in the battle for climate justice.” dhanusha@khaleejtimes.com Taylor Scott International