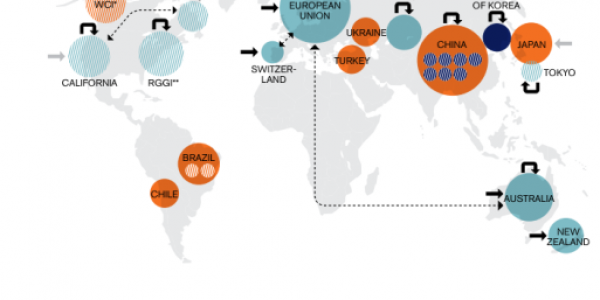 Posted June 3, 2013 It’s ironic considering all the attention on the struggles of the EU Emissions Trading System, but today over 40 national and 20 sub-national government jurisdictions have either implemented or are considering carbon pricing mechanisms. Global emissions trading schemes map via World Bank This wide-ranging assessment comes from no less an authority than the World Bank, which announced their findings this week in a new report “ Mapping Carbon Pricing Initiatives: Developments and Prospects. ” The Bank’s findings once again underling the growing momentum toward an interconnected global carbon market working to fight climate change and spur the transition to a global clean energy economy. Lessons Learned From EU Struggles Despite international failure to establish an international climate deal through the United Nations, the Bank sees individual carbon pricing initiatives developing faster than ever before – and learning lessons from the EU ETS . These markets are taking shape at the same time international prices on carbon are at historic lows and the prospect of coordinated international emissions reduction measures uncertain. “Even as the first generation of the carbon market stutters…it is progress at the country level that gives hope,” said Rachel Kyte , World Bank vice president for sustainable development. “Carbon pricing is emerging and carbon markets have a future.” Multiple systems feature novel system designs like pricing stabilization mechanisms to make them flexible and adjustable to changing economic situations that may have been unforeseen when they were created. The current glut of allowances and low prices in the EU ETS has been attributed to system inflexibility to handle reduced allocation demand after the economic recession. EU ETS allowance price chart 2008-2013 via World Bank Carbon Pricing Covering 20% Total Global Emissions These emerging schemes could make a massive impact on global emissions. As of 2013, the countries with functioning systems or carbon pricing mechanisms scheduled to start within the next few years collectively emit 10 gigatons of CO2 per year – equal to about 20% of global emissions, or the combined annual emissions of the US and EU. The Bank report highlights cap and trade systems in the EU, California, Kazakhstan , New Zealand, Quebec, the Regional Greenhouse Gas Initiative , and regional markets in Japan, as well as South Korea’s developing system . In addition, carbon taxes are cited in Australia , British Columbia, Denmark, Finland, Ireland, Norway, South Africa , Sweden, Switzerland, and the United Kingdom. Even more promising, the Bank’s report does not fully consider China’s fledgling system , which has begun pilot programs in major cities and will roll out nationally in 2020. “If China, Brazil, Chile, and the other emerging economies eyeing these mechanisms are included, carbon pricing initiatives could…cover almost half of total global emissions,” said Niklas Hohne of report co-author Ecofys. Severe Beijing air pollution image via Shutterstock Linkages And Expanded Targets Boost Value The Bank report also recognizes the value of international system linkages in stabilizing individual systems long-term. Linkages between the EU and Australia and California and Quebec , and potentially the EU and China , will create efficiencies and benefits for each system. However, the Bank cautions linkages need to be carefully timed to allow new systems to become established before connecting to other schemes. Bank analysts also note the growing trend of existing or scheduled systems expanding coverage of domestic emissions, with Australia and Korea now targeting 60% coverage, California eyeing 85% coverage , and New Zealand targeting 100% coverage within a few years. “There may not be a one-size-fits-all,” said Alexandre Kossoy , World Bank senior financial specialist. “But it is clear the foundation of the first generation of market-based instruments is informing what will constitute the future landscape of carbon pricing.” Does Hope Spring Eternal? Ultimately, it all comes down to climate, the ability to fund our transition to a sustainable future, and our inability to come to international agreement on climate policy. World Bank President Jim Yong Kim recently said climate change presents “serious consequences to the economic outlook” of international economies, and the Bank’s report acknowledges current emissions put us on the pathway to a devastating 3.5-4 degree Celsius temperature rise by 2100. If enough carbon pricing systems are online or planned by the next United Nations climate meetings, the power of international carbon markets as an economic and environmental stimulus may be too hard to ignore. Taylor Scott International