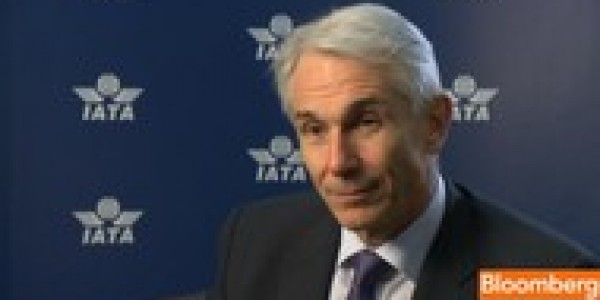 By Kari Lundgren & Chris Jasper – Jun 3, 2013 Airlines backed a call for an emissions market to offset growth in their greenhouse gases after 2020, a step that could spur international talks on tackling pollution from the industry. International Air Transport Association members adopted today at their annual general meeting in Cape Town a resolution in favor of a market-based mechanism to help address airlines’ emissions. IATA produced the proposal before a September gathering of the United Nations’ aviation panel that will consider the industry’s tools to fight climate change. 18:14 June 3 (Bloomberg) — International Air Transport Association Chief Executive Officer Tony Tyler talks about profitability, international airline consolidation and environmental awareness. He speaks with Bloomberg’s Kari Lundgren in Cape Town. (Source: Bloomberg) It is “vitally important” to send a strong message that “we are an industry determined to address environmental performance, determined to continue to show leadership and determined to play our part in shaping a fair and equitable solution to this global problem,” Willie Walsh, chief executive officer of British Airways parent International Consolidated Airlines Group SA (IAG) , said in a statement today. The IATA resolution comes as representatives of governments in the UN’s International Civil Aviation Organization try to iron out a deal to reduce air industry pollution. Countries from Russia and China to the U.S. are seeking a global pact after protesting the inclusion of foreign flights in the European Union’s emissions-trading system last year. The bloc deferred the carbon curbs to help the ICAO talks. Significant Contribution “This is unprecedented for the airline industry to take such a powerful step,” said Dirk Forrister, president of the International Emissions Trading Association in Geneva. “It’s encouraging that carbon offsets are the central cost savings mechanism that they are using to meet climate goals at the lowest cost.” Under the EU’s carbon cap-and-trade system, designed to meet market-based emissions targets, tradable permits are allocated to polluters that must surrender enough of them to cover their emissions or pay a fine. Verified emissions reported by airlines in the EU were almost 84 million tons in 2012, or about 4 percent of the total in the bloc’s program, the European Commission said on May 16. IATA’s resolution is a “very strong message” that the industry seems ready to support a single global market-based mechanism, EU Climate Commissioner Connie Hedegaard said in an e-mailed statement today. “Time for governments to match this and deliver in ICAO,” she said. The post-2020 program would set the market’s emissions baseline at the average of greenhouse-gas output in the three years through 2020, IATA said. Overwhelming Majority The resolution was backed by an “overwhelming” majority of airline executives voting at the meeting, according to IATA Chairman and Qantas Airways Ltd. CEO Alan Joyce. Air India Ltd. and Air China Ltd. both voiced concerns. Market-based measures for airlines should be considered only as a secondary tool and as a part of a broader package of measures to cut greenhouse gases, Air India Chairman Nandan Rohit said. They shouldn’t be implemented unilaterally and “should only be applied within the national boundaries of a state and limited to the national carriers,” he said at the meeting today. “If a state decides to implement MBM on air carriers of third states there should be a bilateral agreement in place.” Welcome Departure The IATA proposal means that it only endorses a global program instead of a patchwork of national policy measures, while maintaining opposition to the EU emissions trading system, Brussels-based lobby group Transport & Environment said in an e-mailed statement today. “Today’s IATA resolution represents a welcome departure from their historical position that better air traffic control, better planes and biofuels alone can solve the problem,” said Bill Hemmings, aviation manager at Transport & Environment. “However, it kicks the ball in the long grass, until after 2020, and sets out a string of unworkable conditions.” EU carbon permits for delivery in December closed 0.8 percent lower at 3.92 euros a metric ton on the ICE Futures Europe exchange in London . The cost of UN certified emission reductions for December was unchanged at 41 euro cents a ton. “The biggest implication of this is it makes it more likely that international aviation will not come back into the EU ETS,” Trevor Sikorski , an analyst at Energy Aspects Ltd. in London, said by e-mail. “It seems very difficult for the European Commission to make a case for this, particularly if something similar comes out of ICAO this year.” Montreal-based IATA represents 240 airlines worldwide, comprising 84 percent of global air traffic. Members include Deutsche Lufthansa AG, British Airways, Singapore Airlines Ltd. (SIA) and Delta Air Lines Inc. To contact the reporters on this story: Kari Lundgren in London at klundgren2@bloomberg.net ; Christopher Jasper in London at cjasper@bloomberg.net To contact the editor responsible for this story: Lars Paulsson at lpaulsson@bloomberg.net Taylor Scott International