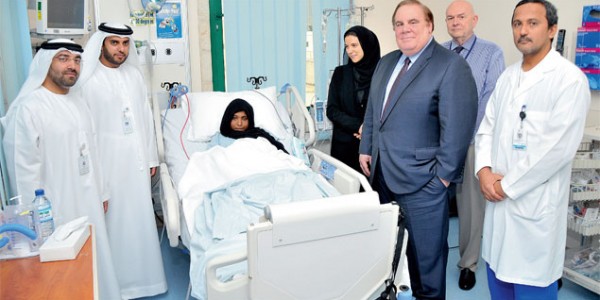 UAE makes organ transplant breakthrough Olivia Olarte-Ulherr / 1 May 2013 The country’s first cadaveric organ transplant was performed on a 23-year old Somali woman with kidney failure. The landmark surgery was carried out a few days ago at the Shaikh Khalifa Medical City (SKMC), the only authorised organ transplantation centre in the UAE. This signals the start of vital organ transplantation from deceased donors, three years after the green light was given by the UAE Health Council. The deceased donor was from Saudi Arabia who died in a traffic accident and whose family decided to donate his organs for needy recipients. The Saudi Commission for  Health Specialties and the Saudi Centre for Organ Transplantation put the word out on the organs that would become available. Patient after the successful transplantation. Tests showed that Latifa Sai’ed, who was on dialysis for the past 16 years, was a near perfect match. Thus, arrangements were made to bring the kidney from Saudi to the UAE by jet. The UAE is signatory to the Organ Transplantation Agreement between the GCC countries. A medical team of specialists was formed for the procedure from SKMC and Cleveland Clinic Abu Dhabi. According to a statement on Tuesday from the Abu Dhabi Health Services Company (SEHA), which owns and operates SKMC, Latifa is “improving daily (and) the organ is functioning normally.” In May 2010, then health minister Haneef Hasan Ali signed off the bylaws governing the 1993 Federal Law on Organ Transplantation. The annexe to the law provided the definition that would make it legal for surgeons to harvest the organ from the “brain dead” patient (one whose brain stem is dead), as well as, the guidelines for multi-organ donation including kidney, liver, lung, pancreas and heart. Dr Ali Abdulkareem Al Obaidli, chairman of the National Organ Transplantation Committee and member of the Gulf Organ Transplantation Committee told Khaleej Times previously that the UAE was building and strengthening its capacity through regional collaboration to overcome “technical challenges”. In December, Shaikha Fatima bint Mubarak, Chairwoman of the General Women’s Union, Supreme Chairwoman of the Family Development Foundation (FDF) and Chairwoman of Supreme Council for Motherhood and Childhood, awarded a Dh1 million grant to help advance training and research in organ transplantation in the region. “As this programme expands and more organs become available, it becomes possible to treat patients who need kidney transplants within the state without them having to travel abroad to seek treatment,” said Saif Bader Al Qubaisi, chairman of SEHA. Since 2007, SKMC has carried out 75 kidney transplants from live donors. They include seven children with the youngest being four years old, while the oldest 64 years old. olivia@khaleejtimes.com Taylor Scott International