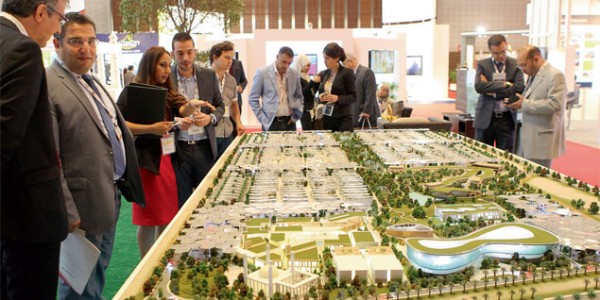 Dubai Sustainable City construction starts in July Muzaffar Rizvi / 1 May 2013 The construction work at Dubai Sustainable City will begin in July and the first cluster of 100 villas and townhouses will be delivered by the end of 2014, the developer said on Tuesday. “The Dh1 billion green-development project, which has 500 villas and townhouses ranging from 3,100 square foot to 4,200 square foot, will be completed by mid-2015, “Faris Saeed, chief executive of Diamond Developers, told Khaleej Times on the sidelines of International Property Show on Tuesday. His Highness Shaikh Mohammed bin Rashid Al Maktoum, Vice-President and Prime Minister of the UAE and Ruler of Dubai, inaugurated the three-day event, showcasing projects worth over $50 billion. Visitors view the Sustainable City model displayed at Dubai International Property Show. About 250 exhibitors are attending the show, spreading at 8,000 square metres at the Dubai International Convention and Exhibition Centre. According to the organizers, leading companies from UAE, Egypt, Canada, Brazil, Turkey, the Philippines, Thailand and Morocco are attending the event that will run until May 2. Saeed said the Dubai’s first sustainable city also includes an environmental sciences university, school, commercial centre, shopping mall and a deluxe sustainable hotel and resort with a world-class natural spa centre. Touristic attraction such as Planetarium and a grass Amphitheatre for hosting events, will also be a part of the green development. He said the project, which has reserved about 70 per cent for green developments, is ready for landscaping this month. In reply to a question about the financing, he said up to 30 per cent of the cost will be self-funded while the rest will be secured through bank loans, long-term investors and off-sale plans. “We have received tremendous response from the investors and funding for project like this is not an issue,” he said, and adding that the developer is in talks with some investors to replicate the project in Africa region. To a question, about the pricing of villas and townhouses in green development, he said: “It would be competitive and based on market trend.” “The project is located near two landmark projects, Mera Townhouses and Casa project, so we will be charging the competitive rates,” he said. Dubai Sustainable City is located near the intersection of Al Qudra Road and Emirates Road on the Northern border of Arabian Ranches Phase 2 Casa Project. Explaining the key features of green development, he said property owners in Sustainable City would own a share in shopping mall and get revenues to offset the maintenance cost. “The mixed-used project will have a car-free zone and solar-powered golf carts for each house. The green initiatives at the development will not only help reduce carbon emissions, but also save energy through insulated walls at villas and townhouses,” he said.   — muzaffarrizvi@khaleejtimes.com Taylor Scott International