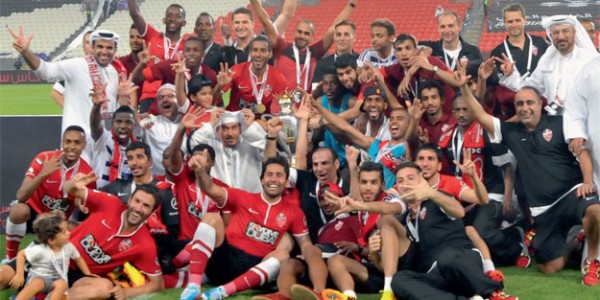 Super Cup: Red Knights reign supreme James Jose / 31 August 2013 Dubai’s Al Ahli beat League winners Al Ain to clinch season opener Super Cup Al Ahli players and officials with the Arabian Gulf Super Cup in Abu Dhabi on Friday. — KT photo by Nezar Balout He has scored many a goals on this ground. It had been his home for nine long years. But this surely must have hurt. Ibrahim Diaky, the subject of a transfer tussle between Al Ain and Al Ahli in the close season, was returning to his ex-club Al Jazira after opting to join Al Ain. But what should have been a fairy tale ended in disappointment as he couldn’t make his crucial penalty count, to hand fierce rivals Al Ahli the Arabian Gulf Super Cup on Friday night. At a packed Mohammed bin Zayed Stadium, and watched by Shaikh Nahyan bin Mubarak Al Nahyan, Minister of Culture, Youth and Community Development, Chairman for the General Authority of Youth and Sports, and close to 30,000 fans, Diaky’s shot from the spot was blocked by Al Ahli goalkeeper Majed Nasser, which triggered massive celebrations. Nasser ran towards the corner flag before doing his famed somersault as a dejected Diaky stood there, covering his face with his hands. Al Ahli won the traditional season-opener 3-2 on penalties after the regulation time had ended deadlocked goalless. Shaikh Nahyan bin Mubarak Al Nahyan gave away the trophy after which the song ‘We are the Champions,’ by British rock band Queen, rang around the Stadium. Ciel, Hugo Viana and Abdulaziz Sanqour were on target for Al Ahli, while Asamoah Gyan and Fares Juma scored for Al Ain. There was not much to choose between the two sides but it was Al Ain who had the better of the exchanges. The match was played in sweltering and energy-sapping conditions and that probably played a part in both teams not being at full tilt. UAE senior National team reserve goalkeeper Khalid Eisa, who moved from Al Jazira, made his Al Ain debut. Ibrahim Diaky started on the bench but came on as an Al Ain player on his old home ground, later in the second half. Brazilian signing Michel Bastos started his first competitive game for Al Ain. Alex Brosque missed the game through injury. Al Ahli sorely missed their captain Grafite who was out through suspension. Adnan Hussain too was suspended, while new signing Waleed Abbas, who crossed over from Al Shabab, was injured. New signing Hugo Viana made his Al Ahli debut. Al Ain came up with the first chance in the opening seconds of the game but Asamoah Gyan headed over the cross bar after a brilliant cross from the right. Al Ahli made a move on 10 minutes but Abdulaziz Sanqour didn’t time his run well as Fares Juma cleared it to safety. Gyan broke through on 15 minutes and went past goalkeeper Majed Nasser but couldn’t control the ball and missed a clear sight at goal. He managed to salvage it on the line but the Al Ahli defence had regrouped.   Taylor Scott International