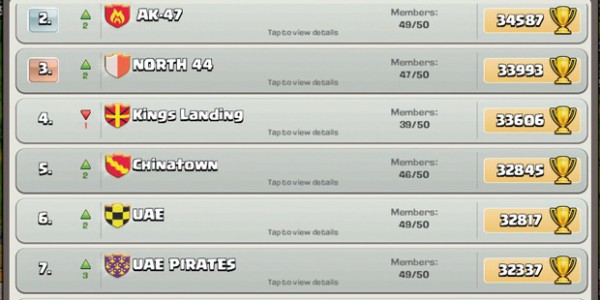 Emiratis crazy on gaming Mustafa Al Zarooni / 21 August 2013 Many locals are abandoning social networking sites Facebook and Twitter, in favour of photo-sharing and gaming sites — with many even prepared to dig deep and spend thousands for the privilege. Fed up of the intense political discussions and heated exchange of views often sprawled across the usually popular social networking sites, people are turning to gaming as a form of escapism from their everyday problems. One particular game, which has garnered huge popularity of late is ‘Clash of Clans’ — an epic combat strategy game, where any member of the community can join in. The game, which only completed its first year weeks ago, allows enthusiasts to form close-knit groups with one another, enabling them to interact with each other, whether chatting amongst themselves or devising plans to excel in their current position in the game. One local, 29-year-old Ahmed Miftah said he has spent more than Dh20,000 in only seven months trying to reach the highest position domestically first, then internationally. “What I have spent is little compared to the hefty amounts of money others have invested in the game”, he said. It has been noticed recently that many Emiratis are moving towards these games where they build camps and combatant armies under the banner of the clan’s castle. The castle is their symbol and enhances the force of the group by bagging a number of trophies they have collected, to prove self assertiveness and stature. So consumed by the game, many even name their castle’s after the names of their countries/regions, so the more power they get, the more recognition their region gets globally. Several gamers have even spent thousands of dirhams purchasing barricks and armies, in turn  strengthening their status and position in the game. The leader board shows three UAE-based teams dominating the top ten list “Two Emirati players had managed to reach the top position in the world single-handedly, and not in the castle”, Miftah said, adding that, the pair had soon lost their place as it is difficult to maintain it, due to the large numbers of competitors. He said the game is very addictive: “It is a widely popular game and catches the attention of gamers rapidly.” He said some of his friends didn’t care about what was being discussed on social networking sites anymore, as they are concentrating on what’s happening in the game, and how powerful their clan is. He noted that most discussions raised on Clash of Clans are about the development of troops and barracks, not politics, like on other sites. He said it is the first-of-its-kind with such features, and it can be played on smartphones — which is convenient for many. Although similar games were on the market, like World of War, the features on Clash of Clash far outweighs its competitors. Miftah pointed out that he managed to reach 10th place on the UAE leader board, yet he has now lost that position because of its growing popularity. He stated that most of his friends, who are of different ages and educational backgrounds, pay money for this game, despite claiming they wouldn’t when they first joined — proving just how addictive the game is. Popular throughout the world, some of it’s most powerful clans are called United Arab Emirates UA and UI, Emirates Pirates and Heart of the Emirates — more proof that Emiratis are among the front runners when it comes to Clash of Clans. Emiratis outnumber participants from other countries and they are progressing quickly on the leader board, thanks to good strategy, teamwork and in many cases, the help of thousands of dirhams to jump to top positions in a short time. Another keen gamer, 28-year-old Ahmed Darwish, who describes himself as a “semi-addict” pointed out that the first thing he does when he checks his phone is examines his barracks and clan — ‘Dubai 187’ — looking for ways to strengthen its position on the leader board. “This game is the only thing which makes me carry my phone all the time, and I cannot do without it,” he said. Darwish affirmed that he is no longer interested in the likes of Facebook or Twitter because people discuss subjects, which they often know very little about. malzarooni@khaleejtimes.com Taylor Scott International