Dogs being taught to use phones and tabs 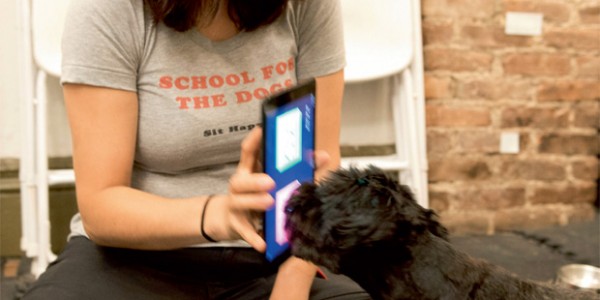 Dogs being taught to use phones and tabs Staff Reporter / 21 August 2013 If you’re not already tired of being technologically outwitted by your toddlers, it could be about to get worse — an American dog school is teaching pets to use phones and iPads. Anna Grossman holds her iPad while her dog Amos touches the screen with his nose at her studio in New York. — AFP School for The Dogs in New York has been teaching clever canines to “use” the touch-manipulated devices for the past year. The dogs select either ‘yes’ or ‘no’ icons on the screen, with their noses. Dog trainer Anna Grossman wrote about the experiment conducted with several dozen dogs and their owners on the company’s website, explaining the tech idea came to her after she read a spoof article about a girl who had done the same thing. Grossman wrote the benefit of teaching the unusual trick was to get dogs to be more compliant in more serious matters. “The more silly behaviours your dog can learn to do reliably on cue, the better he’ll be at understanding you when you need to teach important stuff.” The trainers say one of the first things dogs learn at the school’s classes is how to touch things with their noses, goaded by the promise of an edible reward, which shows dogs “(they) can affect the outcome of (their) environment simply by touching something with (their) nose”. Grossman wrote teaching dogs “nose touches” was the first step to teaching commands such as to come or shut the fridge door. The social-media savvy school also offers dog lessons over Skype, pens a ‘Dog Blog’ and has a Facebook feed updating the hijinks of subscribers’ dogs. news@khaleejtimes.com Taylor Scott International