Sharjah drive against laundry on balconies 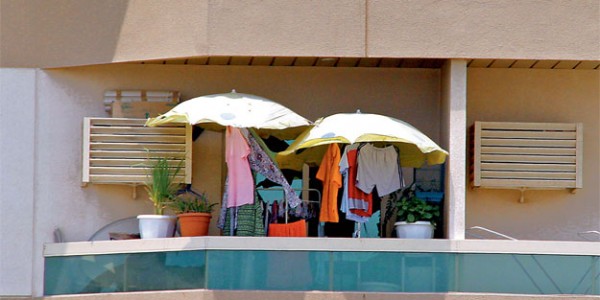 Sharjah drive against laundry on balconies Amira Agarib (news@khaleejtimes.com) / 11 June 2013 In a bid to preserve the image of the city, Sharjah Municipality has announced the launch of an intensive campaign against the hanging of laundry from apartment balconies. The campaign will also target dish antennae and storing of goods clogging up the space. Director of Sharjah Municipality Riyad Abdulla Ayalan said the campaign is based on administrative order No.17, issued on May 24, 1997, which prohibits the hanging of laundry on the balconies and out of the windows of all buildings. He said that the campaign came as part of the tireless efforts exerted by the Sharjah Municipality during the past few years, who have worked with other government departments to curb such behaviour. As a result, Sharjah city won the ‘Beautification and Landscaping’ category in the Arab cities award. During the campaign, which was launched recently, the municipality will distribute informative booklets and publications, in four languages including Arabic, English, Persian and Hindi, to all residents. The material will include information on the government efforts towards promoting a beautiful city as well as the laws pertaining to balcony use. He noted that Sharjah Municipality has repeatedly warned tenants in residential buildings against not abiding by the laws, adding that those who violate the rules will have to pay a Dh250 fine within a week from the date of issue. He warned that in case of non-payment, the fine would be doubled to Dh500. Abdulla Ayalan said that the civic body often launched intensified campaigns, within the framework of its keenness to maintain the civilised appearance and beauty of the city. The municipality will continue its inspections to ensure that residents are abiding by the regulations in order to maintain the beauty of the city and also to preserve public health and called on people to cooperate with the Sharjah Municiplaity by calling the municipality hotline on 993 to report any violations being committed.   Taylor Scott International