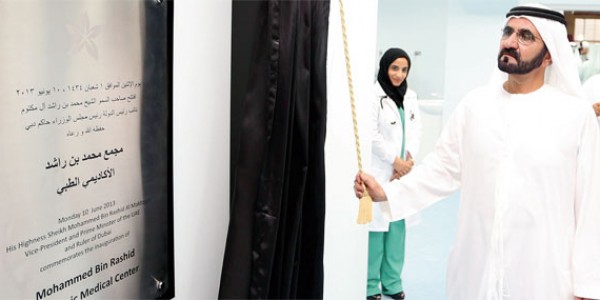 Academic medical centre opened (Wam) / 11 June 2013 His Highness Shaikh Mohammed bin Rashid Al Maktoum, Vice-President and Prime Minister of the UAE and Ruler of Dubai, has inaugurated the Mohammed Bin Rashid Al Maktoum Academic Medical Centre in Dubai Medical City. The inauguration was attended by Shaikh Maktoum bin Mohammed bin Rashid Al Maktoum, Deputy Ruler of Dubai. During the ceremony, Shaikh Mohammed unveiled a Dubai Medical City commemorative painting by Omani artist Madani Al Bakri. Shaikh Mohammed toured the centre’s facilities, where he viewed the emergency rooms and the process of receiving a patient up to their transfer to the Intensive Care Unit (ICU). He also visited the control room which supervises the process where he was briefed by a team of specialists on the whole procedure. Shaikh Mohammed also toured the Premature Infants ICU and labour wards, where he reviewed the modern medical tools utilised in the unit, as well as the training mechanisms for medical students. Shaikh Mohammed then visited the library to see a range of publications made available to the public, which was followed by a visit to a classroom where he attended a lecture in dentistry, wishing the students success in their endeavours. He visited other classrooms, where he viewed a number of trainee students using different machines and facilities related to their studies. Shaikh Mohammed concluded his visit by viewing the works of Madani Al Bakri, signing one of the paintings as a gesture of recognition of the artist’s symbolic contribution which illustrates the importance of art and the role it plays in human and social lives. Shaikh Mohammed also thanked officials at the centre for their efforts, praising the opportunities given by Dubai Medical City to both national and expatriate students. The inauguration ceremony was attended by Abdul Rahman bin Mohammed Al Owais, Minister of Health; Lt.-General Dhahi Khalfan Tamim, Commander-in-Chief of the Dubai Police; Eisa Mohammed Al Maidour, Director-General of the Dubai Health Authority; and other officials from Dubai Medical City.   Taylor Scott International