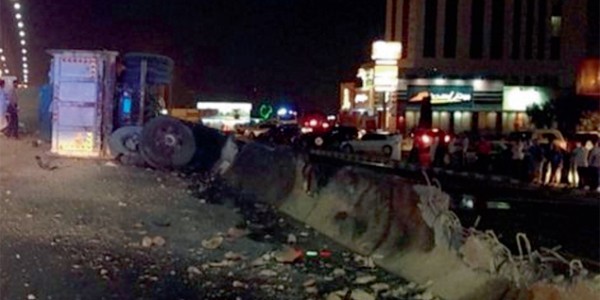 Oil slick after diesel tanker overturns Ahmed Shaaban / 31 August 2013 An Asian man sustained several injuries after the diesel tanker he was driving overturned, spilling its contents, in Ras Al Khaimah on Thursday night. According to a senior police officer, the traffic accident, the second in a month, damaged part of the concrete median of the Etihad bridge where the tanker overturned. Lt-Col Ahmed Al Samm Al Naqbi, Acting Director of the RAK Traffic and Patrols Department, said the tanker driver was to be blamed for the mishap as he was the one who  lost control over the steering wheel and crashed into the concrete median. “He veered off the road, ran into and broke part of the concrete median of the bridge, and overturned on the left side.” The Central Operations Room of the RAK Police, on being alerted about the accident, dispatched the police, traffic patrols, and rescue teams to the scene. “The rescue team safely pulled out the injured driver who was stuck in the damaged tanker, and shifted him to the hospital for treatment and medical care.” Lt-Col Al Naqbi said all the diesel that the tanker was carrying spilled on to the road, covering a wide area. “The concerned authorities, in collaboration with the RAK Civil Defence department, swiftly swung in action and cleaned the road, ensuring a smooth flow of traffic.” The authorities closed the road under the bridge after the accident and shifted the tanker hanging up from the middle on the bridge wall. Al Naqbi urged all motorists and truck drivers to be more cautious and attentive on the road and abide by the set rules and regulations. “Heavy truck drivers are advised to take enough rest when they feel tired, sleepy or unwell so as not to put their lives or the lives of other road users in danger.” Earlier this month, a collision between a water tanker and pick-up truck, had damaged a 55-metre-long concrete part of the Etihad Bridge, in the direction of Al Faisal Road. The pick-up driver, a 75-year-old Emirati man, received several injuries due to the accident. Director-General of Central Operations at the RAK Police Brigadier Ghanem Ahmed Ghanem, said the 33-year old driver of the water tanker, also received minor injuries and was to blame for the accident. A tougher unified traffic law with higher fines and a black points system was implemented in 2008 all over the country, in order to encourage safer driving, especially amid the high incidence of traffic accidents involving heavy duty vehicles. ahmedshaaban@khaleejtimes.com Taylor Scott International