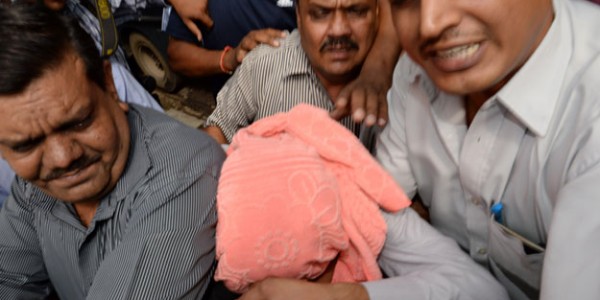 India court finds teenager guilty in Delhi gang-rape case (AFP) / 31 August 2013 An Indian court found a teenager guilty on Saturday over the fatal gang-rape of a student in New Delhi, a crime that sparked revulsion and angry protests in the country, an official said. Indian policemen escort the juvenile (C, in pink hood), accused in the December 2012 gang-rape of a student, to a court in New Delhi on August 31, 2013.  – AFP The juveniles’ court sentenced the teenager to three years in a correctional facility after handing down the first and long-delayed verdict over the brutal assault on the student on a moving bus last December. “He has been held guilty for rape and murder and sentenced to three years subject to review,” Anil Sharma, the chief investigating officer in the case, told reporters outside the court in the capital. The teenager, who was 17 at the time of the attack, was given the maximum penalty after he was tried as a juvenile, and the three years will include the time he has already spent in custody. The victim’s mother emerged from the court in tears, saying “he got just three years … from December onwards he has been given three years”. “He should get an adult sentence,” the emotional mother, who cannot be named for legal reasons, told reporters. Her daughter, a 23-year-old physiotherapy student, died of internal injuries after being raped and assaulted with an iron bar allegedly by six men on the night of December 16. Her male companion was also beaten up before both were thrown from the bus. The attack brought simmering anger about endemic sex crime in India to the boil, and sparked weeks of sometimes violent street protests in the country. The victim’s family had earlier called for the teenager to be given the death penalty, saying the juvenile justice system, which seeks to reform rather than punish, was too lenient. The perceived leniency of the sentence is likely to spark further anger in India where the suspects, some of whom have been beaten up in jail, are public hate figures. Outside the court, up to 20 protesters demanded a harsher punishment, screaming “Hang the juvenile too” and “We want justice.” The separate trial of the four adult suspects in a fast-track court is hearing closing arguments and is expected to wrap up in the next few weeks, with the men facing a possible death sentence if convicted. The fifth adult, the suspected ring leader, died in jail in an apparent suicide. Outrage over the attack pushed parliament to pass a new law toughening sentences for rapists, while there was a round of public soul-searching over the rising tide of violence against women. The Supreme Court this month cleared the way for the principal magistrate, Geetanjli Goel, to deliver the verdict on the juvenile’s case. It was delayed after a petition was lodged in the Supreme Court by an opposition politician for a review of the juvenile law, arguing suspects aged over 16 accused of serious offences should be tried in adult courts. The juvenile, one of six children, was employed to clean the bus allegedly used for the attack and often slept rough or inside the vehicle, reports say. He reportedly left his impoverished home in a village in northern Uttar Pradesh state at the age of 11 to live in Delhi, where he worked in a string of menial jobs until landing the job of cleaning the bus. Children’s rights groups have called for public restraint over the verdict, saying the teenager needed to be given a chance of rehabilitation, adding that India’s child protection services had already failed him. “In fact, every child coming in conflict with the law is a reflection of the state and society failing that child,” Vijaylakshmi Arora, director of policy and research at Child Relief and You, told AFP. Taylor Scott International