No arrest in front of families for minor crimes in Sharjah 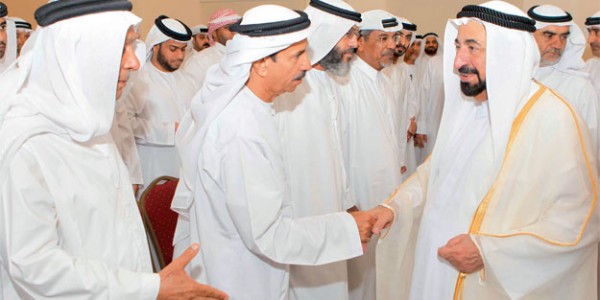 No arrest in front of families for minor crimes in Sharjah Ahmed Shaaban / 1 June 2013 The Sharjah Police have been told not to arrest anyone guilty of a minor crime in front of their families, as the first in a series of suburban majlises (councils) in Sharjah opens. Shaikh Sultan interacts with citizens after inaugurating the majlis at Mughaidar in Al Tala district of Sharjah on Thursday. — Wam His Highness Dr Shaikh Sultan bin Mohammed Al Qasimi, Member of the Supreme Council and Ruler of Sharjah, who inaugurated the majlis at Mughaidar in Al Tala District on Thursday morning, said the councils were to be a safe haven for people to approach officials directly about their concerns. “We have always been dreaming of such outskirts majlises, and only today the dream has come true with the Mughaidar majlis, the first in a series to follow.” He added that the rationale behind such councils is to more efficiently fulfil people’s needs in terms of property, housing and other similar issues. “We…want these councils to enhance communication between officials and all members of the society.”  Shaikh Sultan said there were many critical grounds behind the institution of these councils. “We’d like to protect people’s dignity, particularly home, in front of their wives and children.” Some people may make mistakes or do something wrong and hence the law enforcement bodies get involved, and arrest the wrongdoer in front of his family members. “Such kind of disgrace is not acceptable and does dishonour people.” Dr Shaikh Sultan said this should not happen in the case of minor crimes, such as bounced cheques or failure to pay loans or debts.  “These are not big crimes such as murder, robberies and being a fugitive.” The police have been instructed never to storm any person’s house or arrest them before their family in these minor cases and violations. “Instead, the people in charge of these suburb councils need to interfere and talk to all parties concerned to amicably find a way out.” Shaikh Sultan said some people got angry about bad odour rising from their neighbours’ houses because of the sheep and cattle they were raising. “The suburban councils must interfere to protect neighbours’ rights and (there is) no need for police to interfere,” he said, indicating that people may also submit their comments and suggestions to the competent and prudent officials there to make the process more effective. Present at the inauguration were Shaikh Sultan bin Mohammed Al Qasimi, Crown Prince and Deputy Ruler of Sharjah, and Shaikh Abdullah bin Salem bin Sultan Al Qasimi, Deputy Ruler of Sharjah. – ahmedshaaban@khaleejtimes.com Sultan to chair pan-Arab Council of Elders   The Sharjah Declaration on Family Cohesion, recently issued by the Arab Family Organisation (AFO), called for setting up of a council of elders and a centre for social studies to create a pan-Arab database for family researchers. The council will be chaired by His Highness Dr Shaikh Sultan bin Mohammed Al Qasimi, Supreme Council Member and Ruler of Sharjah. Members of the new council will be selected from Arab countries in consultation with Shaikh Sultan, according to the declaration which was issued this month by the board of trustees of the AFO’s Arab Family Award, at a meeting in Sharjah. The declaration urged stakeholders to study the effects of globalisation on Arab families in preparation for drawing up an Arab strategy to protect the families from destructive thought. It also called for tapping the capabilities of the United Nations agencies involved in the achievement of Millennium Development Goals (MDGs) to reinforce national capabilities in this regard. The declaration recommended a review of development strategies so as to eliminate social backhandedness, poverty, diseases and illiteracy, in rural areas in particular. It also recommended a review of social policies to make them more compatible with MDGs.  It urged for the development of national statistics centres including the improvement of technical capabilities. A media strategy to promote the values of Arab families through cultural and educational programmes was demanded by the declaration. The declaration called for the launch of a charter of honour for Arab TV channels as part of efforts to promote the values of Arab families and culture. It underlined the importance of concerted efforts by the Arab media and educational institutions to formulate a pan-Arab vision for preserving standard Arabic language and the sublime values of Islam The declaration thanked the President, His Highness Shaikh Khalifa bin Zayed Al Nahyan, for his support to work for families in the UAE.  It also thanked Dr Shaikh Sultan for extending his patronage to the AFO and congratulated Lt-General Shaikh Saif bin Zayed Al Nahyan, Deputy Prime Minister and Minister of Interior, on winning the AFO’s Personality of the Year for Family Cohesion and Social Security award for 2013. — Wam Taylor Scott International