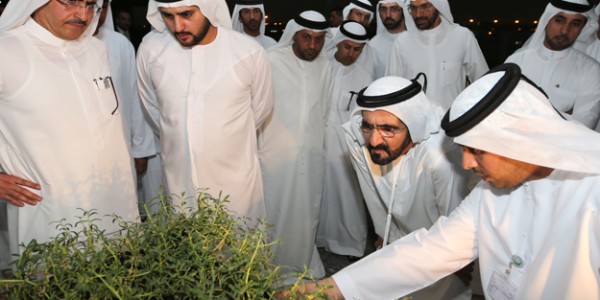 Mohammed visits Dewa’s Sustainable Building Staff Reporter / 10 September 2013 His Highness Shaikh Mohammed bin Rashid Al Maktoum, Vice-President and Prime Minister of the UAE and Ruler of Dubai, has made an inspection visit to Dubai Electricity and Water Authority’s (Dewa’s) Sustainable Building at Al Quoz, on Monday. Costing Dh75 million, the 340,000 square-feet Sustainable Building is the largest government building in the world, with a Platinum rating for green buildings from Leadership in Energy and Environmental Design (LEED), the US Green Building Council institute. Accompanied by Shaikh Maktoum bin Mohammed bin Rashid Al Maktoum, Deputy Ruler of Dubai, Shaikh Mohammed toured the various sections of the building and listened to the detailed brief by the Managing Director and Chief Executive Officer of Dewa Saeed Mohammed Al Tayer about the building’s components and specifications, the use of solar panels with capacity of 660kW for generating electricity power, its contribution to energy saving of about 66 per cent and water conservation by 48 per cent. Shaikh Mohammed, then, watched a documentary film on Dewa’s initiatives to achieve his vision for a green economy in the UAE and to reach sustainable development. He was also briefed about the electronic modes of payment whereby 60 per cent of customers are accessing it compared to 40 per cent of clients who are using the traditional method of payments. His Highness also familiarised himself with the various e-services rendered by Dewa to its clients at all levels and toured the different counters to assure himself of the facilities and procedures offered by the customer service office. Shaikh Mohammed also inspected the models, maps, charts, diagrams, tables of statistics and photos displayed at Dewa corridors. He was also briefed about Dewa’s initiatives and projects, most important of which is the expansion of M-Station for power generation and water desalination, with a production capacity of 2,060MW and 140MIGD at a cost of Dh10 billion. This station was established to make use of the most state-of-the-art technologies in the world. An additional operational investment of Dh1.2 billion has increased production capacity by 400MW and increased thermal efficiency to 90 per cent. According to Al Tayer, M-Station’s overall efficiency is 82.4 per cent with total fuel oil storage of 320,000 cubic metres. Moreover, Shaikh Mohammed was briefed about the Dh12-billion Shaikh Mohammed bin Rashid Al Maktoum Solar Park, which is being constructed at Seih Al Dahal in Dubai with a planned capacity of 1,000MW on final completion. The park will comprise a research and development centre, an educational institute, a museum of technology, exhibitions to help students in training and be aware of the components of this project, which is the first and largest one of its kind in the region. As part of its continuous efforts to diversify Dubai’s energy mix and to combine these sources to generate electricity, Dewa has issued a request for tenders for its new clean-coal power plant; using new sources to generate electricity. The Hassyan plant will be the first of its kind in the region to use clean-coal technology and the project will contribute significantly to alternate sources of energy, with total production capacity of 1,200MW to be carried out in two 600MW phases, with the first phase to be completed by 2020, and the second by 2021. The Vice-President was also briefed about the progress of the first phase of the integrated hydro-geological study to determine the location of groundwater basins and re-inject them with surplus drinking water to store and re-pump to its water networks to meet emergency needs. The study is expected to be completed at the end of this year. Taylor Scott International