If they can do it, so can you! 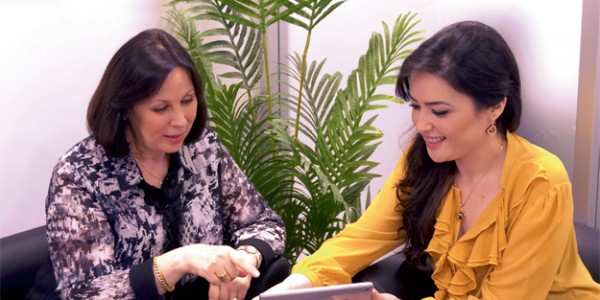 If they can do it, so can you! 10 September 2013 Christina Voskou speaks to Dubai-based female entrepreneurs to learn about the challenges they faced in establishing their businesses and finds inspiration in their stories IN THE 19th century, Margaret Ann Bulkley disguised herself as a man, James Barry, to study medicine and finally become one of the top-ranking medical officers in the British Army at the time. Much has changed since those days with women having easier access to education and opportunities, using their knowledge and taking an active part in driving the impact they want to have in the world, not only as wives, mothers and careers. For Fiona and Mariam, it’s all about teamwork for a successful business. — Photos by Christina Voskou Women are gaining power in the labour force, in politics and in their domestic environment, and many of them are becoming entrepreneurs empowering themselves and their communities. Your wound is also your light At 26, Rasheda Khatun, was diagnosed with Hodgkin’s Lymphoma, a very serious form of cancer, which in most cases implies slim chances of survival. She battled the disease and won.  Taking strength from her experience, she says it allowed her to discover the road to healing and how to influence others positively into making life-changing decisions. Now, as a wealth and wellness coach, the British-Bangladeshi is on a “mission to empower and inspire people to live the life they love.” She believes that in order to do that you need to shape up your finances and your health and she’s made a career out of advising people on the right ways to go about doing that.  Since her work is very personal she decided to create a brand with which she could support the various levels of businesses she works with and formed the Edwards Khatun Advisory Group with a partner. She says that as a woman, she found the process for establishing her business to be quite easy since there are usually “no queues in the women’s lane.”  In fact, she feels that “the UAE is very accommodating to new ideas and business set ups unlike any other country I know of.” However, she strongly recommends that any person starting up their own business should have sufficient savings to support them while getting established, in order to avoid financial difficulty.   Family ties Fiona and Mariam Tokempash are not only mother and daughter, they are also business partners. Together they have set up the Knowledge and Human Development Authority-accredited, Royal English Language Centre in Dubai.  Since its opening in 2012, the Centre has been offering customised English courses of all levels and has recently added Emirati Arabic to their course offerings. They both agree that working as a team has made the business development easier.  Fiona, the director of learning at the Centre mentions they “wanted to start a business here in the UAE to contribute to the developing growth of the country and to be a part of that energy, both on a business and personal level.”  Mariam, Fiona’s daughter, and the Centre’s Managing Partner, has grown up in the UAE and feels honoured to be able to give back something to the community that has given her so much. “Offering English and Emirati Arabic classes is something that I believe can benefit both UAE nationals and expatriates in Dubai to improve their personal life and help them communicate with one another better,” she says.  Mariam’s advice to her fellow entrepreneurs is to “do the homework and research the market thoroughly before jumping into a new business venture. The research and planning were the most time consuming elements of conceptualizing our business.”   According to Fiona, three elements are crucial for a successful business: passion, patience and preparation. “Allow your passion and ideas to translate into impacting people’s lives. Networking and advertising through all media and personally are key in today’s business environment. Celebrate your achievements along the way, to measure how far you’ve come and continually reinvest financially and creatively to sustain further growth.”  As challenging as it may seem, ladies possibly have an advantage here. Mariam mentioned that on several occasions she felt that perhaps due to the fact that government officials are predominantly male, “they were willing to go the extra mile to help us on our entrepreneurial mission.”   Peruvian flare Veronica Smulders, a Peruvian expat, says that she would hear “numerous comments from many women regarding the dissatisfaction of the services of brands and the inability to address the different needs of women in the region.” This led her to identify a business opportunity to bring Michèlle Belau, a well-known Peruvian brand, to Dubai.  As the managing director and regional franchise owner for the brand, “created for women by women”, Smulders is hoping to cater to busy women of diverse backgrounds and cultures.  “There is so much that goes into the Michèlle Belau brand. Our philosophy is that each and every being is beautiful in their own unique and special way,” she says.  For Smulders, setting up the business came with its own set of challenges, the biggest being the nine-hour time difference between Dubai and Peru. Also, like any other business, it was important for her to learn the UAE rules and regulations and she admitted that finding the right information was often a challenge.  Veronica’s advice to other female entrepreneurs is that any business idea should be validated for the selected market. She recommends being prepared to get involved, even physically, and to anticipate possible delays, however she warns that entrepreneurs should “not get discouraged from the challenges you will face. If everything was easy, it wouldn’t feel as good when you fulfill your goal”.  “There is no greater satisfaction than seeing your business flourish and being able to offer something exciting and positive to your customers and community,” she says. Taylor Scott International