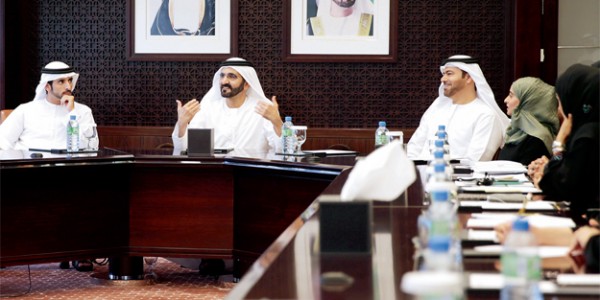 Mohammed calls for fresh growth ideas (Wam) / 11 September 2013 The next growth period in the UAE would require new administrative ideas given different challenges, aspirations and high ceiling of expectations, said His Highness Shaikh Mohammed bin Rashid Al Maktoum,Vice-President and Prime Minister of the UAE and Ruler of Dubai. The remarks were made during a brainstorming session chaired by Shaikh Mohammed in his office at Emirates Towers on Tuesday in the presence of Shaikh Hamdan bin Mohammed bin Rashid Al Maktoum, Crown Prince of Dubai. Shaikh Mohammed and Shaikh Hamdan during the meeting in dubai on tuesday. — Wam “We need new tools, different ways of doing things and continuous innovation in the light of world’s competitive environment, whose intensity increases day after day,” Shaikh Mohammed said. At the meeting, where many ideas were proposed, Shaikh Mohammed noted that the collective thinking and open dialogue with work teams create better ideas that could lead to successes. Addressing the team, he said: “My job as a team leader is to get better ideas from the work teams and use them to enhance life of people and make the UAE a better place to live in”. Shaikh Mohammed discussed with the team the position of the UAE in the light of neutral international reports, adding that “Our next projects should bear international standards that match the UAE’s international status, and at the same ensure welfare for citizens.” Mohammed Abdullah Al Gergawi, Minister of Cabinet Affairs and other senior officials were present on the occasion. Taylor Scott International