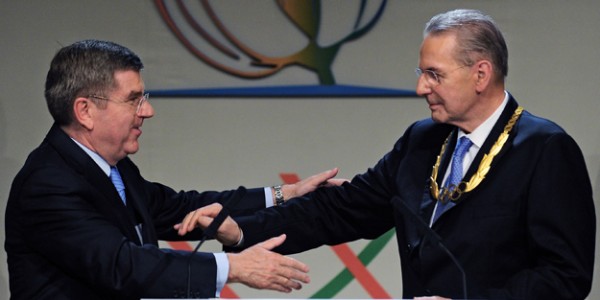 Germany’s Thomas Bach elected IOC president (AP) / 11 September 2013 Thomas Bach was elected president of the International Olympic Committee on Tuesday, keeping the powerful sports body in European hands. Bach, a 59-year-old German lawyer, succeeds Jacques Rogge, the Belgian who is stepping down after 12 years as head of the Olympic body. New International Olympic Committee (IOC) President, German Thomas Bach (L), greets outgoing IOC President Jacques Rogge (R) after the announcement of his election during the 125th IOC session on Tuesday. -AFP Bach, the long-time favourite, defeated five rival candidates in the secret balloting. He received 49 votes in the second round to secure a winning majority. Richard Carrion of Puerto Rico finished second with 29 votes. Bach received a standing ovation for nearly a full minute after Rogge opened a sealed envelope to announce his victory. Bach bowed slightly to the delegates to acknowledge the warm response and thanked the members in several different languages. “This is a really overwhelming sign of trust and confidence,” Bach said. A former Olympic fencing gold medalist who heads Germany’s national Olympic committee, Bach becomes the ninth president in the 119-year history of the IOC. He is the eighth European to hold the presidency. Of the IOC’s leaders, all have come from Europe except for Avery Brundage, the American who ran the committee from 1952-72. Bach is also the first gold medal-winning Olympic athlete to become IOC president. He won gold in team fencing for West Germany in 1976. “I know of the great responsibility of an IOC president,” Bach said. “This makes me humble. I want to lead the IOC according to my motto, ‘Unity and Diversity. “I want to be a president for all of you. This means I will do my very best to balance well all the different interests of the stakeholders of the Olympic movement. This is why I want to listen to you and to enter in an ongoing dialogue with all of you. You should know that my door, my ears and my heart are always open for you.” After awarding the 2020 Olympics to Tokyo and bringing wrestling back into the games, the IOC completed the last of its three critical votes — choosing the person for the most powerful job in international sports. Bach’s supporters had hoped for a first-round win, but a second-round victory still showed that he had a big base of support. Carrion, who chairs the IOC’s finance commission and negotiates lucrative US television rights deals, wound up being Bach’s only serious challenger. The votes fell off after that with Ng Ser Miang of Singapore getting six, Denis Oswald of Switzerland five and Sergei Bubka of Ukraine four. C.K. Wu of Taiwan was eliminated in the first round after an initial tie with Ng as low vote-getter. Ng had been considered a strong contender, but his chances were dented after Tokyo’s win because the IOC was unlikely to give Asia two major prizes in a row. Bach has long been viewed as the favourite because of his resume: former Olympic athlete, long-serving member on the policy-making IOC executive board, chairman of the legal commission, head of anti-doping investigations and negotiator of European TV rights. None of the six candidates has made any dramatic proposals for change, promising to continue the line pursued by Rogge, particularly in the fight against doping. The election follows Saturday’s IOC decision to send the 2020 Games to Tokyo and Sunday’s vote to reinstate wrestling for the 2020 and 2024 Games. The presidential vote is what most of the 100-plus IOC members had been focusing on. Much of the pre-election talk among the members has been about the power of Shaikh Ahmad Al Fahad Al Sabah, the Kuwaiti who heads the Association of National Olympic Committees. The Shaikh was a key backer of Bach. With his influence in Asia and among the national Olympic committees, the Kuwaiti can deliver a large number of votes. He was seen as playing a key role in Tokyo’s victory, even helping Istanbul get to the second round of voting to keep Madrid out of the final. Taylor Scott International