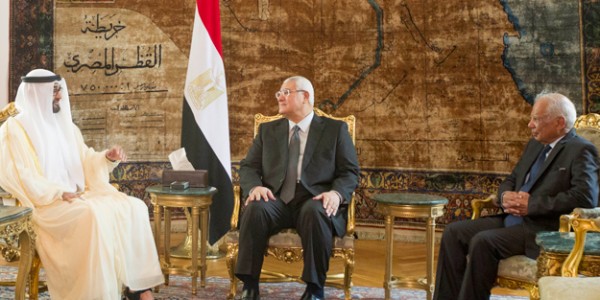 Crown Prince reaffirms UAE’s support to Egypt (Wam) / 2 September 2013 General Shaikh Mohammed bin Zayed Al Nahyan, Crown Prince of Abu Dhabi and Deputy Supreme Commander of the UAE Armed Forces, and the Egyptian interim President Adli Mansour discussed the fraternal relations and cooperation between the UAE and Egypt on Sunday. The discussions took place as the Egyptian President received the Crown Prince and his entourage at Al Etihadiya Palace in Cairo. Gen. Shaikh Mohammed holding discussions with Egyptian President Adli Mansour and prime minister Dr Hazem El Beblawy in Cairo on Sunday. -Wam During the meeting, Gen. Shaikh Mohammed conveyed to the Egyptian President greetings of the President, His Highness Shaikh Khalifa bin Zayed Al Nahyan; and His Highness Shaikh Mohammed bin Rashid Al Maktoum, Vice-President and Prime Minister of the UAE and Ruler of Dubai, and their best wishes of progress, stability and prosperity for the leadership and people of Egypt. The two sides also discussed ways of bolstering and supporting aspects of cooperation between the UAE and Egypt in the service of their interests and the aspirations of their two brotherly peoples. At the meeting attended by Shaikh Hazza bin Zayed Al Nahyan, National Security Advisor and Deputy Chairman of the Executive Council of Abu Dhabi, and Shaikh Abdullah bin Zayed Al Nahyan, Foreign Minister, the two sides also discussed the latest regional developments, and the efforts by Arabs and the international community to contain their consequences and to boost the opportunities for regional and international peace and security. Gen. Shaikh Mohammed affirmed the UAE’s satisfaction with the return of security and stability to Egypt, thanks to the efforts being made by the Egyptian leadership at this critical juncture. He reaffirmed the UAE’s support to the Egyptian people and its choices for determining their national requirements and aspirations. He also reaffirmed that the UAE’s support to Egypt stems from its Arab national affiliation and its own national and humanitarian policy which is based on peace, security, tolerance, love, as well as on urging for cooperation, rejection of division and violence, so as to establish stability and implement development and prosperity for all peoples. He emphasised that the directives by Shaikh Khalifa in this regard are clear and stipulate providing support to Egypt and its people. This emanates from Shaikh Khalifa’s belief that a strong and stable Egypt is a strength for, and a pillar of the renaissance of the Arab Nation and the Islamic Nation. Gen. Shaikh Mohammed said: “The UAE people and leadership will always remain a strong supporter for Egypt and its brotherly people in continuation of the UAE’s unwavering approach established by the late Shaikh Zayed bin Sultan Al Nahyan who also established the historic and solid relationship with Egypt and its brotherly people, based on love, friendliness and cordiality and on the principles of fraternity, mutual respect. This approach continues under the leadership of Shaikh Khalifa who is always keen on deepening pan-Arab solidarity in the service of the causes of the Arab Nation and the Islamic Nation.” Gen. Shaikh Mohammed wished Egypt further glory, pride and eminence, and continuous peace and stability. He also wished the Egyptian people success in fulfilling their aspirations for progress and dignified living. For his part the interim Egyptian President Adli Mansour asked Gen. Shaikh Mohammed to convey his greetings to Shaikh Khalifa and Shaikh Mohammed. He thanked the UAE for standing by Egypt and supporting the Egyptian people’s choices.   UAE’s support hailed Meanwhile, Sakina Fouad, Egyptian presidential Adviser for Women’s Affairs, on Sunday hailed the support extended by the Gulf states, the UAE and Saudi Arabia in particular, to the June 30 revolution, aborting plans targeting Egypt. The Egyptian senior official also hailed the visit by His Highness Gen Shaikh Mohammed to Egypt on Sunday. She noted that the positive aspects of the UAE’s position on Egypt is represented by an emphasis on the strength of the intra-Arab relations and their coming back to normalcy. The Egyptian Permanent Representative at the Arab League, Amr Abul Ata, thanked the UAE and Saudi Arabia, for supporting and helping Egypt after the June 30 revolution. In a speech at a meeting for the permanent representatives of Arab states to the Arab League, the Egyptian representative said Egypt astonished the world with its January 25, 2011 revolution which was triggered under the slogan, “Bread, Freedom and Social Freedom.”  Taylor Scott International