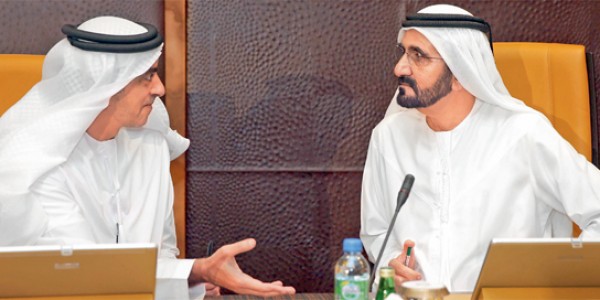 Mohammed asks ministers to face challenges boldly Staff Reporter / 16 September 2013 His Highness Shaikh Mohammed bin Rashid Al Maktoum, Vice-President and Prime Minister of the UAE and Ruler of Dubai, has issued a bold challenge to all cabinet ministers. “I asked all of them to achieve the first place globally in an area or a competitiveness indicator of their choice over a period of one year,” Shaikh Mohammed said in a Tweet about Sunday’s cabinet meeting, during which he echoed President His Highness Shaikh Khalifa bin Zayed Al Nahyan’s call to double efforts to upgrade government performance, policies and procedures. Shaikh Mohammed in talks with Lt-Gen Shaikh Saif bin Zayed during the Cabinet meeting in Abu Dhabi on Sunday. — Wam Shaikh Mohammed also tweeted his confidence in the country’s ministers to fulfil the directives to make the UAE a competitive global powerhouse. “Life is boring without challenges, and I fully trust in my team’s ability to meet their challenge and lead us to global excellence.” The meeting at the Presidential Palace came peppered with challenges for Cabinet members. “Each of you should set a priority for his ministry to achieve the first position.” Shaikh Mohammed also congratulated students on the commencement of the new academic year. “Pursuing education is the core of our culture and a national duty for all Emiratis.”  He reiterated that the government has been exerting utmost efforts to promote education saying the government wanted education based on innovation and creativity. “The education that will bring up future leaders in all walks of life to follow up the course outlined by the founding fathers.” The Vice-President said education was a passport to the future, where the UAE will be an important player in a global knowledge-based economy. The Cabinet session was attended by Lt.-General Shaikh Saif bin Zayed Al Nahyan, Deputy Prime Minister and Minister of the Interior and Shaikh Mansour bin Zayed Al Nahyan, Deputy Prime Minister and Minister of Presidential Affairs. The Council of Ministers approved a draft federal law on the amendment of some provisions of the civil procedures law of 1992. The bill aims to achieve justice and required balance between adversaries through several new provisions, such as the introduction of a case management system, enabling the filing of cases at the office of case management or registering them electronically. The new provisions also include the granting of opponents rights to appeal before the court that issued the judgment. The Cabinet also endorsed the Federal Government unified guide for financial procedures in order to streamline all financial operations of the Federal Government based on current financial laws and protection of public funds from risks. It approved the issuance of a federal law in order to eliminate the use of banned substances in horse racing and equestrian and agreed to recall the Federal National Council (FNC) to convene its third session of the 15th legislative chapter. It agreed to the request of the FNC to discuss a topic on protection of the community from drugs. Cabinet also approved the recommendations from the Financial and Economic Committee on the amendment of the federal budget for the 2013 fiscal year. The total requests for financial allocations made by nine federal institutions are more than Dh705.7 million. It also approved the restructuring of the Board of Trustees of The National Human Resource Development and Employment Authority (Tanmia). Regarding international agreements, the Cabinet approved three agreements for air transport with Finland, Uruguay and Niger and approved the second contribution of the UAE to the International Monetary Fund’s Trust Fund for Growth and Reduction of Poverty. -news@khaleejtimes.com Taylor Scott International