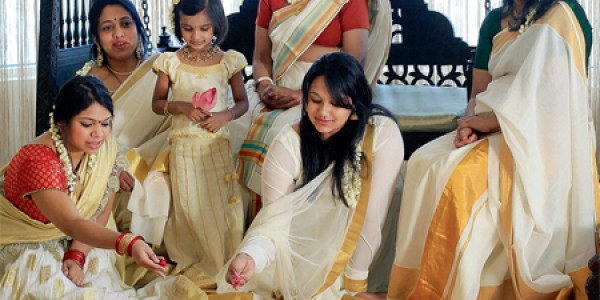 Malayalees celebrate Thiruvonam today Staff Reporter / 16 September 2013 Expatriates from Kerala, who form the largest group of Indians in the UAE, are celebrating their most important festival, Thiruvonam, today. Thiruvonam is the main day of the 10-day harvest festival of Onam that is celebrated by people of all religions in the south Indian state known as ‘God’s Own Country’. Onam marks the mythological homecoming of King Mahabali, during whose reign Kerala was believed to have witnessed its golden era. People of Kerala welcome the king in a symbolic way by arranging flower carpets and with traditional dances and games so as to show they are as content as people in his time. The expatriate Malayalee community’s Onam celebrations also include floral decorations done on the ground called pookkalam as well as life-sized statues of elephants, traditional drum beats, dances and games and more importantly, mass vegetarian feasts called Onasadya . Though it is custom to make the traditional vegetarian feast at home, thousands are having their Onasadya from restaurants since Thiruvonam falls on a working day here this year. Several Malayalees are also taking a day off from work to celebrate the day with family and friends. For those who could not do so, it is going to be an evening of celebrations. Malayalees in the UAE, irrespective of their religions, will continue to celebrate Thiruvonam during the weekends over the coming months, often clubbing their Eid get-together with it. Cultural processions with traditional art forms and dances, pookkalam competitions and mass vegetarian feasts where thousands sit together to have Onasadya served on banana leaves are part of their celebrations. The Onasadya usually features more than a dozen dishes and traditional sweets. Malayalees are particular about buying fresh vegetables that come from India for this meal. Hence, thousands of tonnes of vegetables and fruits are imported from Kerala to the Gulf countries for Onam celebrations. Like in the past, the last-minute purchase of fresh items used for the sadya saw huge demand for these items in the Fruit and Vegetable Market at Al Aweer and several supermarkets and hypermarkets in Dubai this weekend. While families and groups of bachelors prepare the feast at homes, thousands of Malayalees depend on hotels and restaurants for their Onam meals. Several office-goers have geared up to order Onasadya from their favourite outlets today. According to the Dubai Municipality, about 40 per cent of the food establishments in Dubai are run by Malayalees. Most of these eateries are offering special Onasadya with up to 25 dishes. Some of them even fly in veteran cooks from Kerala to prepare their Onasadya which gets sold like hot cakes. One outlet has partnered with a popular radio station to host Onasadya aboard a dhow in Dubai Creek while another one is hosting a cooking contest in traditional Onam recipes. Santhosh Menon, general secretary of Akgma, a residential association of Malayalees in Al Khail, said they distributed Onam kits comprising some essential items to about 500 families during the weekend. Arabian Center in partnership with LuLu Hypermarket celebrated Onam in the cultural way by organising various activities like Kathakali, Shinkkarimelam, Puli Kali, Theyyam, Pookkalam Contest, Mohiniyattam, etc on Saturday. Many other shopping centres have Onam-themed counters and special discounts for the occasion. Readymade textile shops are also cashing in on the festival with some of them making special door delivery of Onam dresses to expatriates’ relatives back home. sajila@khaleejtimes.com   Taylor Scott International