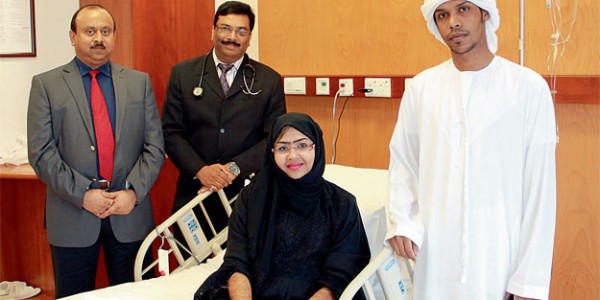 Major heart surgery conducted on young woman asmaalizain@khaleejtimes.com (Staff Reporter) / 28 May 2013 When the young, newlywed Emirati Zahra Marhoon came to Ras Al Khaimah (RAK) Hospital emergency room complaining of severe upper backache and shortness of breath, little did she and her family members know that she was suffering from life-threatening coronary artery disease. Based on her family history, 32-year-old Zahra was found to be a high-risk patient with diabetes and a history of premature coronary artery disease similar to her mother who suffered from it when she was in her 40s. Bypass surgery was performed by Dr Arun Goyal recently to treat severe blockages in three of her arteries. Courageous and smiling, Zahra shares her experience and asks all women to go for regular health checks. “I got married just eight months back and was looking forward to spending a beautiful life with my husband, but my condition presented a difficult challenge,” she said. “Going through such a major surgery was not an easy task but I am very thankful to the team of doctors who provided me the much needed support and confidence. I was feeling great within two days of the surgery and was discharged on the fifth day,” said Zahra. “My husband and my family also stood by me every step of the journey. On the doctor’s advice, I have made lifestyle changes to keep myself healthy and fit.” Although heart disease is often thought of as a problem for men, more women than men die of the disease. Around 8.6 million women die from heart disease annually, accounting for a third of all deaths in women worldwide. As much as 71 per cent of women experience early warning signs of heart attack with the sudden onset of extreme weakness which feels like the flu, often with no chest pain at all. “Heart disease or heart attack symptoms in women are so atypical that it becomes difficult to recognise,” said Director of Cardiac Services at RAK Hospital Dr Ajay Kumar Kanojia. “These are more subtle than the obvious crushing chest pain often associated with heart attacks, may be because women tend to have blockages not only in their main arteries, but also in the smaller arteries that supply blood to the heart — a condition called small vessel heart disease or microvascular disease,” he explained. Women are more likely than men to have heart attack symptoms unrelated to chest pain which include neck, shoulder, upper back or abdominal discomfort, shortness of breath, nausea or vomiting, sweating, lightheadedness or dizziness or unusual fatigue. “In Zahra’s case as well, she had experienced backache and shortness of breath a couple of times earlier too, which she treated with analgesics and felt better, but this time the pain was severe and she was rushed to the emergency room,” said Dr Kanojia. “Diabetes and smoking are strong predictors of heart problems in both genders, but the risk is two to four-fold in women,” he added. Heart disease is the leading cause of deaths in the UAE, and cardiovascular problems account for 22 per cent of deaths in the country.   Taylor Scott International