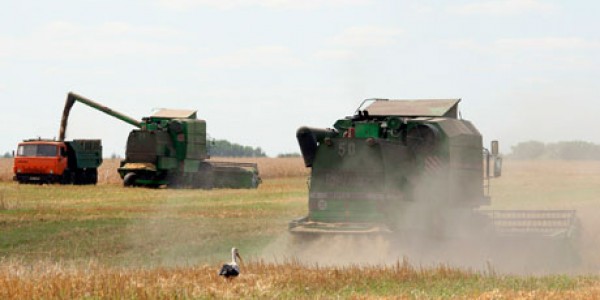 Land rights not just issue for developing world as report shows public subsidies help a few firms ‘grab’ vast tracts of EU land John Vidal guardian.co.uk , Wednesday 17 April 2013 17.19 BST Farmers harvest grain in Chernigov. In Ukraine, 10 giant agro-holdings now control about 2.8m hectares. Photograph: Genia Savilov/AFP/Getty Images Vast tracts of land in Europe are being “grabbed” by large companies, speculators, wealthy foreign buyers and pension funds in a similar way to in developing countries, according to a major new report . Chinese corporations, Middle Eastern sovereign wealth and hedge funds, as well as Russian oligarchs and giant agribusiness have all stepped up land acquisitions in the past decade in a process that the report says is preventing ordinary people farming, and concentrating agriculture and land wealth in few hands. According to research by the Transnational Institute , Via Campesina and others, half of all farmland in the EU is now concentrated in the 3% of large farms that are more than 100 hectares (247 acres) in size. In some EU countries, land ownership is as unequal as it is in Brazil, Colombia and the Philippines. Although peasant farmers and smallholders have been moving off the land for decades, speculators and commodity crop farmers are taking over vast tracts of land, says the 200-page report. This is seen widely in former Soviet states, say the 25 authors in 11 countries. In Ukraine, 10 giant agro-holdings now control about 2.8m hectares. One oligarch alone controls more than 500,000 hectares. Chinese companies have moved into Bulgaria on a large scale and Middle Eastern companies are now major producers in Romania. The concentration of land ownership is speeding up. In Germany, 1.2m land holdings in 1966-67 shrank to just 299,100 farms by 2010. Of these, the land area covered by farms of less than two hectares shrank from 123,670 hectares in 1990 to just 20,110 in 2007. In Italy, 33,000 farms now cover 11m hectares, and in France more than 60,000 hectares of agricultural land are lost each year to make space for roads, supermarkets and urban growth. In Andalusia, Spain, the number of farms has dropped by more than two-thirds to under 1m in 2007. In 2010, 2% of landowners owned half of the land. None of the new research was done in Britain, which has some of the highest concentrations of land ownership anywhere in the world, with 70% of land reportedly owned by less than 1% of the population . “This is an unprecedented dynamic of land concentration and creeping land grabbing. It has worsened the existing situation where many young people want to stay in or take up farming but cannot maintain or gain access to land,” said Professor Dr Jan Douwe van der Ploeg of Wageningen University, a member of the research team. The authors argue that the “land grab” has been fuelled by the common agricultural policy (CAP), which distributes one-third of all EU subsidies to farmers each year, but the funds have been captured by large-scale farmers. “In Italy in 2011, 0.29% of farms accessed 18% of total CAP incentives, and 0.0001 of these, or 150 farms, cornered 6% of all subsidies. In Spain, 75% of all the subsidies were taken by just 16% of the largest farmers. In Hungary in 2009, 8.6% of farms cornered 72% of all agricultural subsidies,” said Van der Ploeg. “The three most pressing land issues in Europe today are land concentration, land grabbing and inability of young people to maintain or gain access to land to enter sustainable farming – interlinked, triangular land issues quite similar to the ones we see in Africa, Latin America and Asia today.” The report suggests that, as in many developing countries, there is strong opposition to land “grabbing” in Europe. There have been reports of communities occupying land. In Andalusia, landless farmers are occupying land collectively and cultivating it. In Vienna, young people are squatting on fertile urban land. “Land needs to be seen again as a public good. We must reduce the commodification of land and instead promote public management of this common resource on which we all depend,” said Jeanne Verlinden of the European Co-ordination Via Campesina. “Priority should be given to the use of land for smallholder and peasant agriculture and food production, rather than handing over land to those private property commercial interests.” Taylor Scott International