Iowa Farms Worth Double Since 2008 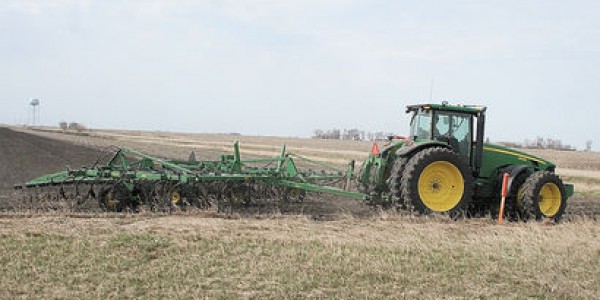 Biannual survey shows crop land values continue to rise May 5, 2013 Farmland property values have risen 17 percent in the past year, according to the Iowa Chapter of Realtors Land Institute survey. The survey estimates the value of bare, unimproved land through a survey of land institute members, financial institutions that approve agricultural lending and rural appraisers. Kyle Hansen, president of the Iowa chapter of the Realtors Land Institute, said per-acre values for tillable cropland have more than doubled since March 2008, increasing from $4276 and acre to $8,691 an acre on average. Prices in northwest region are growing, hitting $13,387 per tillable acre. Article Photos AP PHOTO A survey released at the end of March shows that cropland, like the land shown here in the file photo, has increased in value over the past six months, more than doubling since 2008. The central Iowa region exceeded the state average for per-acre value in high, medium and low-quality cropland. “They have seen a larger increase because of ethanol and direct competition in that area,” Hasen said. The land institute also requested pasture and timberland values as supplemental information. Every six months, the institute conducts the survey and gives a percent increase from the previous six months. Central Iowa’s land values increased 8.5 percent in the past six months, according to the survey released at the end of March. Central Iowa’s increase was just below the 9.4 percent increase statewide, but the report shows that each of the nine districts showed an increase. Over the past few years, however, Hansen said the areas that see the largest increase vary between surveys, meaning that no region of the state is growing at a faster rate than the others. Mike Duffy, an economist at Iowa State University who helps conduct the state land value survey, said farmland values are high in both nominal and inflation-adjusted terms. The primary reason is the success farming has seen since the 2006 Energy Policy Act, which mandated the use of ethanol in gasoline. That mandate resulted in farmers having more money to spend, and farmers typically invest their money in accumulating more land, Duffy said. The success of ethanol will depend largely on the price of oil. Concerns over a collapse in land values, should the government cease subsidizing ethanol, will only prove valid if producing ethanol proves more costly than producing oil in the free market. Growth in India and China also contributes to a rise in the sale of corn to feed animals, Duffy said. “As their incomes improve, their diets improve,” he said. “More money means more meat. More meat means more sales.” A downside to the increase in land value, Duffy said, is that it makes carving out a niche more difficult for upstart farmers because established farmers are buying all the available land, making land more expensive because of its increased scarcity. According to the survey, central Iowa exceeded the state average in per-acre value of high, medium and low-quality cropland. The region fell just shy of meeting the state average for nontillable pasture and timber per acre. Taylor Scott International