India PM warns of inflation but reassures on rupee 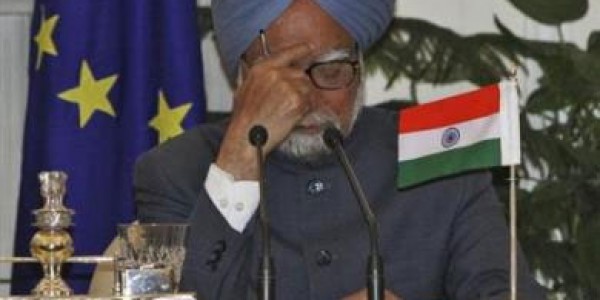 India PM warns of inflation but reassures on rupee (AFP) / 30 August 2013 India’s premier warned the nation on Friday to brace for higher prices because of the rupee’s plunge to record lows, but he forecast the economy would pick up in the second half of the year. Manmohan Singh, addressing parliament for the first time since the rupee went into a tailspin this month, called the currency’s worst slide against the dollar in nearly two decades “worrying” and a “concern”. But he said actions by his left-leaning Congress-led government to reduce “the unsustainably large” current account deficit, which has undermined the currency, would bear fruit. “We are no doubt faced with important challenges but we have the capacity to address them — it is at times like these that a nation shows what is truly capable of,” he told lawmakers. He warned Indians that the weak rupee “will no doubt lead to some further upward pressure on prices” because of the rise in import prices, especially of fuel. Singh, a reknowned economist hailed for lighting the fuse for India’s fast growth in the 1990s as finance minister, has been under fire as premier with his government hit by a string of corruption scandals that have sapped foreign investor confidence. He skirted opposition charges that the rupee’s woes were due to the government mismanagement and blamed the fall on tensions over Syria and a pick up in the US economy that is expected to lead to an end to the Federal Reserve’s stimulus. Seeking to put a positive spin on the volatile exchange rate, he suggested that the currency’s decline could prove a blessing as it would make India’s exports cheaper and help revive economic growth. Growth data for the first financial quarter to June, due later Friday, would be broadly unchanged from the previous quarter’s 4.8 percent, he said, but the economy would accelerate in the second half. “Growth will pick up in the second half barring extreme unforeseen eventualities,” he said, adding the strong annual monsoon would boost harvests and help reduce food inflation. “The stabilisation process which should support the value of the rupee is underway… the currency markets will recover,” he added. Foreign exchange markets have a “notorious history of overshooting, this is what is happening in relation to the rupee,” he said, adding, it is important to recognise that “the fundamentals of the Indian economy continue to be strong.” After his speech, the rupee was trading at 66.64 to the dollar; down from its day’s low of 67.80 rupees and still comfortably stronger than the record near 69 rupees it touched on Wednesday.       Taylor Scott International