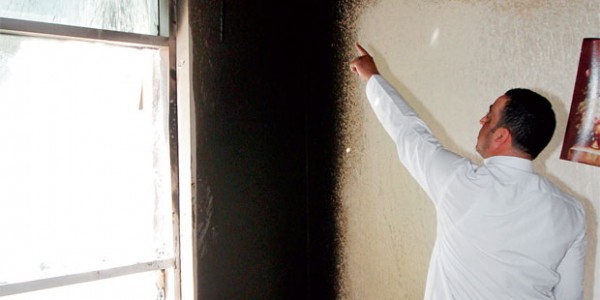 ‘Faulty fire alarms’ at gutted building Amira Agarib / 24 April 2013 Fire alarms installed in a 20-storey building, half of which was gutted in the latest in a string of devastating fires in Sharjah, were not working after the maintenance company failed to complete routine work, the building manager said. Civil Defence tracked the fire to flat 701 of Sharjah’s Al Hafeet Tower 2, in Al Taawun area, which took out half the building in just two hours on Monday, leaving more than 80 families homeless — most without alternative accommodation. Police said they had taken action against the party responsible for the maintenance of the fire alarms, while building manager Nassir confirmed the alarm system had not been working at the time the fire erupted. He said that this was the responsibility of a contracted company, responsible for fire safety supply and maintenance. Nassir said the company had been doing the maintenance one day before the fire erupted, however they had not come on the second day to fix the alarm system. A number of residents who were affected by the fire say they were left stranded on the street till as late as midnight on Monday night, with no offers of help from anyone. Al Hafeet Tower 2 resident Ammar shows the damage caused to his flat by the fire in Sharjah on Tuesday. — KT photo by M. Sajjad One tenant named Ammar said that when the fire erupted he and his family were eating lunch but they did not hear any alarm. However, he heard noise and later somebody knocked on the door to alert him, at which point he evacuated with his children. He said within a few minutes, police officials had arrived and within 10 minutes firefighters had joined them. When he got down, he saw the fire had erupted at flat number 701, which is directly top of his flat, he said. It appeared a child’s bedroom was burnt and his entire flat affected by smoke and water, which had filled it. Ammar said he waited until midnight but the Red Crescent did not offer any assistance, so he went to the Buhaira police station where people were told to see where they could spend the night. “I took my wife and we went to a hotel while other families, who did not have money or could not enter, went to other families, as nobody came to help…until 1pm nobody had come and we do not know where we are going to stay, or when the maintenance will be done to our flat so we can return.” Another resident Um Ammar said tenants who switched off the electricity before leaving the flats and building prevented the fire from extending to the whole building. Neither she or her husband had gone to work on Tuesday, while the children stayed back from school. “Nobody came to help us or show us where we could stay at night so we went to a hotel, but we cannot continue like this because we are supposed to go to our work place…so far we could not change our clothes.” Nassir told Khaleej Times that the building management was keen to ensure comfort of the residence and they were considering the situation on how they could provide all necessary support. He pledged the management would pay the hotel expenses for affected people who had to spend nights in hotels, while tenants could coordinate with the management until the completion of maintenance work. Tenants should go to Buhaira police station and report their losses before bringing a copy to the management along with their key, he said. Nassir said the building had full insurance and those who were affected would be compensated. However, an insurance official said that compensation depended on the type of insurance. If it was not fully insured or the fire was caused by human error, the insurance would not pay, the official said. Meanwhile, insurance company officials visited the building on Monday afternoon inspecting the affected flats to see the damage. They would not give any comment when asked. news@khaleejtimes.com Taylor Scott International