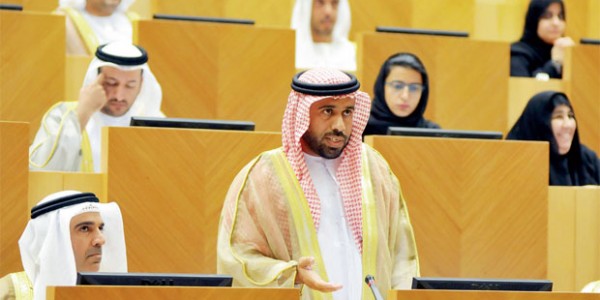 Education, judiciary focus of FNC meet Nissar Hoath / 24 April 2013 The Federal National Council (FNC), after almost a month-long break, resumed its sessions on Tuesday and discussed several issues with education, judicial system and housing topping the agenda. Misbeh Saeed Al Ketbi at the Federal National Council session in Abu Dhabi on Tuesday. — KT photo by Nezar Balout Chaired by First Deputy Speaker Dr Amal Al Qubaisi, the meeting was also attended by Minister of Education Humaid Mohammed Obeid Al Qattami, Minister of Justice Dr Hadef Jowan Al Dhahiri and Minister of Public Works Abdullah bin Mohamed Belhaif Al Nuaimi. During the question hour, a number of members raised various issues pertaining to the judicial system of the country, education, housing for the UAE nationals and nationalisation of jobs both in the private and public sectors. Fast tracking judicial system Member Misbeh Saeed Al Ketbi raised the issue of court cases, particularly those involving expatriate parties are always delayed and the Ministry of Justice has to address the issue. He said: “There is always a delay in the procedures of court cases especially where one of the parties is a foreigner. This could have a negative impact on the reputation of the judiciary system of the country and has to be resolved.” In response to Al Ketbi’s question Al Dhahiri said that the delays in such cases were neither intentional nor caused by poor performance but due to complications involving the judicial system and proceedings of other countries involved. “We have to follow the international standards and follow the judiciary system of the country where the party involved in a case comes from. However, we have made several changes in the proceedings to fast track such and other cases for early solutions,” Al Dhaheri told the house. Another member Ahmed Ali Al Za’abi raised the issue of e-process charges at courts and said the fee of Dh350 was only for the electronic document transaction charge.“Our courts take the trouble of carrying out transactions and solving complicated cases without any charge. In addition to the electronic document transaction charge of Dh350 there should also be a charge for court proceedings and hearing,” Al Za’abi said. In response, Al Dhaheri said proceedings of court hearing and tariffs are being worked out and soon a more organised system will be introduced. Heavy school bags Another heated debate was on school children being forced to carry heavy books and stationary bags. One of the members said, there are cases where children have to carry schools bags heavier their own weight. “Several medical studies warn that heavy school bags have negative impact on the balance and strength of students. Studies also show many children have developed body curvature because of carrying heavy school bags daily. Schools, both public and private, have to organise their systems in a way that children do not have to bring all the books to school if the class schedule does not require on certain days,” said Ali Issa Al Nuaimi. The council also discussed the issue of housing for Emiratis. An in-house committee on housing also released a report on the issue, stating that the Housing Commission for the UAE Nationals has found that the proportion of the Ministry of Public Works has an estimated Dh900 million for housing for the financial year of 2013. The committee report further added, the amount was far below as compared to 2011 allocation of Dh1.107 billion and 1.042 billion in 2012. nissar@khaleejtimes.com Taylor Scott International