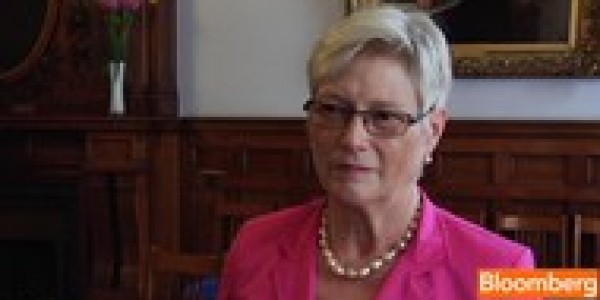 By Mathew Carr & Sally Bakewell – Jun 10, 2013 The European Union needs to think of other ways to prevent new coal-fired power stations from being built because its carbon market won’t achieve that this decade, according to the International Energy Agency . Nations should consider measures including bans of new and inefficient plants known as “sub-critical,” unless they are fitted with carbon capture and storage technology, Maria Van der Hoeven, the executive director of the Paris-based agency that advises 28 developed nations, said today in a London interview. 3:41 June 10 (Bloomberg) — International Energy Agency Executive Director Maria van der Hoeven discusses the IEA’s view that the European Union needs to think of other ways to prevent new coal-fired power because its carbon market won’t achieve that target through 2020. She talks with Bloomberg’s Mathew Carr in London. (Source: Bloomberg) EU carbon permits, which have plunged 88 percent since 2008, would need to trade at 10 times their current value of about 4 euros ($5.28) a metric ton to prompt utilities to switch to cleaner natural gas from coal, according to a Bloomberg fuel switch calculator. The push in Europe to improve energy efficiency helped drive down permit prices, Van der Hoeven said. “What we want to see is that sub critical coal-fired power plants are less in use and are not going to be constructed any more,” Van der Hoeven said. “The most important thing is we look into the reasons beyond the collapse in the price of carbon” to explain why emissions are not falling faster. Lawmakers need to review energy policies to make sure they don’t contradict each other or overlap to cut emissions and protect the climate, Van der Hoeven said. Halting Plants “Governments have to look into the complementarity of what they are doing. If you only look at one technology and forget about the rest, that doesn’t help,” she said. While the IEA does not have the authority to stop nations using coal power, it’s urging them to halt construction of new units, Van Der Hoeven said. “We show them with our report what will happen if they don’t,” she said, referring to a report published today called “Redrawing the Energy-Climate Map.” The publication contains two different scenarios. Under a situation that limits an increase in global temperature to 2 degrees Celsius (3.6 Fahrenheit), the world will leave two thirds of its fossil fuel reserves untapped before 2050. Under that climate-saving scenario, revenues in the power industry through 2035 from 2012 are $1.3 trillion higher than in the agency’s central case, which includes fewer climate protection policies. “The higher gross revenues result from a combination of lower electricity demand and higher electricity prices, with the latter effect proving slightly larger,” according to the report. Technology, legislation, markets and industry can operate together to save the climate, Van der Hoeven said. “When the Stone Age came to and end, it wasn’t because there was no stones anymore, but because we had different technologies,” she said. “There’s no need to use coal for our energy supply if we have other options.” To contact the reporters on this story: Mathew Carr in London at m.carr@bloomberg.net ; Sally Bakewell in London at sbakewell1@bloomberg.net To contact the editor responsible for this story: Lars Paulsson at lpaulsson@bloomberg.net Taylor Scott International