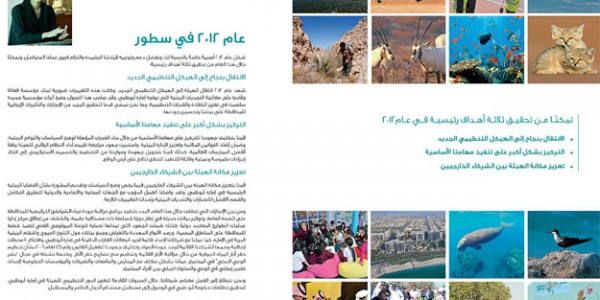 Envisioning a greener future for Abu Dhabi (Wam) / 12 May 2013 The Environment Agency – Abu Dhabi (EAD) is leaving no stone unturned in protecting the environment and enhancing the biodiversity of the Capital. In its recently released bilingual annual report for the year 2012 it has documented its efforts in maintaining sustainable development and providing a safe and healthy environment for the residents and citizens of the emirate. A snapshot of the EAD’s annual report for the year 2012. — Wam  In the report’s foreword, Mohammed Al Bowardi, the EAD’s Managing Director, said: “Since its establishment, the EAD has carried out extensive scientific research, developed and implemented key environmental policies and monitored the emirate’s environment to protect public health and ensure the integrity of its ecosystems. These efforts have been carried out under the directives of the President, His Highness Shaikh Khalifa bin Zayed Al Nahyan, in line with the legacy of the late Shaikh Zayed bin Sultan Al Nahyan, the founding father of the UAE, and under the guidance of Shaikh Hamdan bin Zayed Al Nahyan, the Ruler’s Representative in the Western Region and Chairman of EAD.” Highlighting the agency’s 2012 achievements, EAD Secretary-General Razan Khalifa Al Mubarak said: “This year’s achievements included, but were not limited to, releasing the latest data in line with our role as a scientific authority, introducing a bilingual enviro-portal to give users access to spatial environmental information that we have been collecting since the early 1990s, transferring knowledge with regional counterparts on our successes in using geographic information system (GIS) technology for wildlife conservation and environmental protection and unveiling an internationally-endorsed Emergency Operations Centre. Our efforts to protect our rich biodiversity included implementing conservation plans for our protected areas, monitoring endangered species and collecting information about the Emirate’s terrestrial biodiversity and ecosystems. As the environmental regulator  for the emirate, the report reveals how we are making strides toward ensuring residents are breathing clean air, that our biodiversity is protected and that our water resources are conserved for future generations.” While Al Bowardi noted that: “Over the past years, the EAD has led — on behalf of the government — the development of Abu Dhabi Environment Vision 2030, which sets our future agenda for environmental, economic and social policy-making and which will help point our emirate towards more sustainable development.  It breaks complex development issues into understandable, manageable, and achievable targets and offers a tool we can use to make decisions that protect the environment and the quality of life for future generations.” Abu Dhabi Environment Vision 2030 directs us in a collective response to help ensure more sustainable development by focusing on policy development and enforcement on issues such as climate change, clean air and reduced noise pollution, water resources, biodiversity, and waste management,” he said. Al Bowardi stressed: “Today, the Emirate of Abu Dhabi is witnessing a development boom, thus the EAD has further strengthened its regulatory and enforcement framework that focuses on tackling the main issues, in partnership with governmental institutions and non-governmental organisations as well as the academia and private sector.” Taylor Scott International