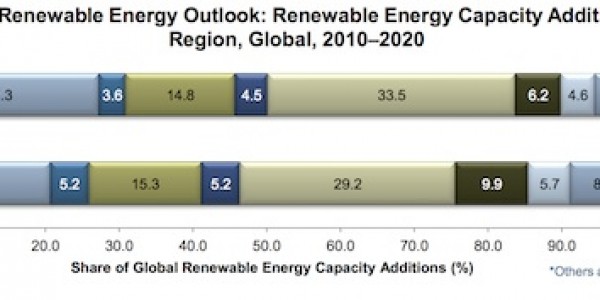 August 23, 2013 by Energy Manager Today Staff There is clear evidence that emerging economies will gradually take a larger share of the renewable energy market, according to research by Frost & Sullivan . Economic development and revised energy priorities in the regions of Asia, Latin America, the Middle East, and Africa will drive a more sustained increase in the adoption of wind, solar and biofuel generation technologies, according to Frost & Sullivan’s Annual Renewable Energy Outlook 2013 . For example, from 2010 to 2015 EU countries will account for 27.3 percent of global renewable energy capacity additions. From 2015 to 2020 EU countries will account for just 20.7 percent of such additions, the report says. In contrast, from 2010 to 2015 India will account for 6.2 percent of global renewable energy capacity additions. That figure will rise to 9.9 percent from 2015 to 2020, the report says. The Middle East’s share of global renewable energy capacity additions will rise from 3.6 percent to 5.2 percent in the same time period, the report says. As a result of technological innovation and mass deployment leading to scale economies, the cost of renewable energy has declined dramatically in recent years, the report says. Solar photovoltaic module prices declined by up to 75 percent between 2008 and 2012 and the price of wind turbines has declined by 25 percent during the past three years. Such falls, combined with the need to diversify away from a high reliance on fossil fuels, enable developing countries to accelerate the adoption of new energy sources, the report says. Urbanization, population growth, and energy security concerns are other key drivers for the rise of renewable energy capacity in emerging regions, according to Frost & Sullivan. By 2014, 55 percent of energy decision-makers at large firms operating in emerging economies believe there will be significant to transformative changes in the way their firm manages energy, according to a Verdantix report released in September . This figure is eight percent higher than energy leaders in developed economies. Global Energy Leaders Survey 2012: Emerging Economies also found firms from emerging economies move energy management up the corporate ladder, with 75 percent of executives surveyed saying they make energy-management decisions at a global, national or divisional level — 4 percent higher than those from developed nations. Taylor Scott International