Brazil And China Scramble For Agricultural Influence In Africa 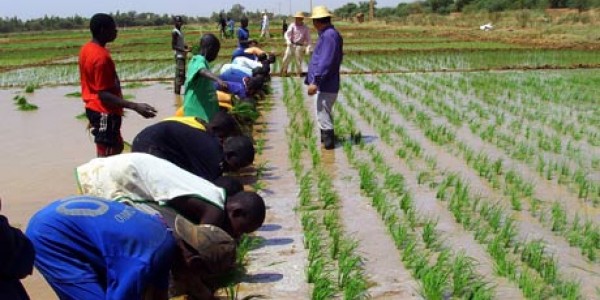 Agriculture is central to Chinese and Brazilian development efforts – how trailblazing are their methods? Agricultural experts from China offer tips on rice planting to farmers in Dakar, Senegal. Photograph: Zheng Zheng/Xinhua[/color] China and Brazil have identified agriculture as central to their development efforts in Africa, confident in the belief that they can make valuable contributions based on their own agricultural success. China trumpets its ability to feed 20% of the world’s population on roughly 10% of the world’s arable land, while Brazil can boast of agribusiness-led commercial production of soya bean and ethanol as well as its promotion of smaller-scale farming. Last month, José Graziano da Silva, the director general of the UN’s Food and Agriculture Organisation, stressed the importance of south-south co-operation in advancing agricultural development in developing countries. “It is time for Latin America to increase its contribution to African development,” Graziano told African and Argentinian agriculture ministers in Buenos Aires, Argentina. What has been the experience of Brazil and China in agriculture in Africa; do they offer a new paradigm of south-south development co-operation? A collection of essays published last month by the Institute of Development Studies concludes that there is no single Chinese, Brazilian or African position. “China and Brazil have very different interests and priorities, and within these countries there are intense contests between different approaches, reflecting domestic political dynamics,” says the IDS bulletin China and Brazil in African Agriculture . “On the other hand, Africa’s 55 countries are hugely diverse, and any new development encounter arrives on the back of a very complex agrarian history and political economy.” The case of Brazil is particularly interesting, since it offers two distinct models. The first consists of large-scale farming for the production of soya and ethanol, backed by the ministry of agriculture, livestock and food supply, which describes itself as the ministry for agribusiness. The second emphasises integrated rural and social development in Brazil’s poorest regions through programmes designed to ensure the provision of technical support and credit for family farmers. Both approaches are evident in Africa. The ministry of agrarian development (MDA), a supporter of the family farm sector, has drawn on Brazil’s More Food programme, focusing on improving farmers’ access to equipment, machinery and agricultural technologies, including tractors, through the provision of concessional credit. Ghana, Zimbabwe and Mozambique have been given credit and signed a technical co-operation agreement. Shipping of machines and equipment will begin this year. The challenge, says the study, is to avoid subsidised technologies that end up benefiting wealthier farmers. At the other end of the spectrum is the involvement of agribusiness. In Ghana, for example, the Brazilian company Constran is building an ethanol plant, designated for export to Sweden, partly to get round European tariffs on Brazilian ethanol imports. So the $306m (£196m) project involves Brazilian technology and European investment in an African country. Competing visions such as these mirror Brazil’s complex agrarian economy, says the study, and the outcomes will depend on how African governments, farmers, entrepreneurs and civil society organisations absorb, shape and apply the models on offer. While Brazil is a new player in Africa, China has been involved in African agriculture for more than 40 years. Lila Buckley, senior researcher on China at the International Institute for Environment and Development in London, writes that Chinese agriculture co-operation tends to be heavily technocratic, reflecting China’s own experience. It has established more than 40 agricultural demonstration centres on the continent and provides agricultural assistance combined with infrastructure development. The latter includes dam construction with technical training, the provision of inputs and storage facilities, and facilitating links between agricultural ministries and communities. While the Chinese official line is that China’s agricultural experience can be of benefit to Africa, Chinese NGOs have offered more critical perspectives. A project officer at a Chinese NGO told Buckley: ” Aid is supposed to help local people develop by introducing China’s experience. But people forget to ask whether this is appropriate or not. Chinese people don’t understand African history or the development situation.” There is also concern about the suitability of China’s intensive agriculture model, which has achieved increased food production but only at the cost of the heavy depletion of water and soil, intense fertiliser use – which causes high pollution – and heavy energy consumption. The emphasis on technology transfer above other factors also worries some experts. “The Gates foundation is spending $1bn on agriculture technology,” an agriculture policy adviser at the Chinese Academy of Science told Buckley. “But not all technology is necessarily useful for Africa. In China, rural development started with land tenure reform, not with technology.” Buckley notes that, despite rhetoric of mutual benefit, China has generally taken the lead in designing and implementing agriculture projects, with only passive participation from African partners. This has led to frustration on both sides and project failures, as in the case of the Xai-Xai irrigation scheme in Gaza province in Mozambique. When the scheme failed, one Chinese participant complained: “We are here to help farmers, but the farmers are not interested in agriculture.” Kojo Sebastian Amanor concludes that south-south co-operation – though frequently framed as path-breaking – builds upon pre-existing forms of international development, neoliberal frameworks, and the expansion of capital in Africa.[/font][/color] Taylor Scott International