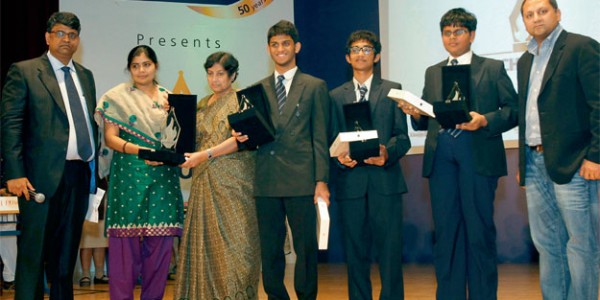 Abu Dhabi Indian School wins Quiz Dubai contest Staff Reporter / 12 May 2013 Six teams battled it out on Saturday at the nail-biting finals of ‘Quiz Dubai’ hosted by Emirates NBD at the Shaikh Rashid Auditorium. Sreenath Pothera, Kushal Mohnot and Balaji Shankar of the Abu Dhabi Indian School are joined on stage by their teachers, along with cards at emirates NBD vice-president Prateek Vahie and quiz master C.K. Jaidev in Dubai on Saturday. — KT photo by Mukesh Kamal From the birth date of film star Ashton Kutcher to recognising famous landmarks across the world, all students gave their competitors a run for their money. Almost 150 teams participated in the all UAE-school quiz. Six teams made it to the finals and Abu Dhabi Indian School walked away with the first prize while Our Own English High School, Dubai (Girls) came second and Indian High School, Dubai came third. Students from the winning team were ecstatic as the results were announced. Sreeredh Pothera, Kushal Mohnot and Balaji Shankar represented Abu Dhabi Indian School. Though last year the quiz focussed on the London Olympics theme, this year, the organisers opted for a more general theme. “The quiz has definitely gotten bigger. If you observe, school quizzes are still very few in the country, but that trend is changing all together. More schools have participated this year,” said R. Sivaram, SVP, cards business head, Emirates NBD. “The turnout this year has been great as well. It only shows that interest in quizzing is definitely increasing among students here in the UAE. If you look at it, even the quality of quizzing is improving drastically. Students come better prepared. They have understood that quizzing is more than just collating facts. This year we had a school come in all the way from Al Ruwais,” added Sivaram. He said that Quiz Dubai will now be an annual event in Dubai’s quizzing calendar. Schools that made it to the finals included Indian High School, Dubai; Gems Modern Academy, Dubai; Our Own English High School, Al Warqaa; Our Own English High School, Dubai; and Abu Dhabi Indian School, Abu Dhabi.  The quiz was hosted by quiz master C. K. Jaidev. dhanusha@khaleejtimes.com Taylor Scott International