UAE stands with the world against terror 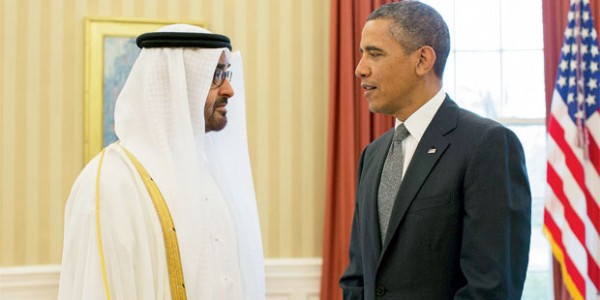 UAE stands with the world against terror (Wam) / 18 April 2013 General Shaikh Mohammed bin Zayed Al Nahyan, Crown Prince of Abu Dhabi and Deputy Supreme Commander of the UAE Armed Forces, met United States President Barack Obama at the White House at the beginning of a two-day visit to the US during which he met with senior officials. Gen Shaikh Mohammed bin Zayed speaks with President Obama in the Oval Office prior to a lunch meeting at the White House on Tuesday. — Wam Gen Shaikh Mohammed conveyed to Obama condolences of the President, His Highness Shaikh Khalifa bin Zayed Al Nahyan, for the victims of the Boston bombings and his wishes of speedy recovery to the injured. Gen Shaikh Mohammed said: “The UAE condemns this act of terror and stands by all countries of the world against all acts of terrorism, regardless of their sources or motives.”  Obama asked Gen Shaikh Mohammed to pass on his greetings to Shaikh Khalifa and his thanks for the feelings of sympathy expressed by the UAE leadership for the victims and the injured from the Boston incident. The meeting, which was attended by Foreign Minister Shaikh Abdullah bin Zayed Al Nahyan, touched on the bilateral ties and ways to enhance them to serve the mutual interest of the two friendly countries and peoples. The two sides discussed initiatives that will further enhance the bilateral trade, and encourage economic growth and opportunity. They underscored the importance of the ongoing close consultations, cooperation and coordination in all domains to further strengthen the friendship between the UAE and the USA. Gen Shaikh Mohammed exchanged views with the US president on the latest regional and international development, as well as international initiatives and efforts to promote peace, stability and development in the Middle East. During his visit, Gen Shaikh Mohammed also met with US Vice-President Joseph Biden and discussed with him the strong ties and shared interests between the UAE and the US. According to recently released US government data, the UAE is ranked among the US’ fastest growing trading partners. The total bilateral trade between the two countries grew from approximately $4.5 billion in 2002 to $24.8 billion in 2012. While in Washington on his two-day visit, the Crown Prince also met with senior US government officials and members of the Congress. Besides Shaikh Abdullah, Gen Shaikh Mohammed was accompanied by Abu Dhabi Executive Affairs Authority Chairman Khaldoon Khalifa Al Mubarak, Undersecretary of the Crown Prince’s Court Mohammed Mubarak Al Mazrouei and UAE Ambassador to Washington Yousef Al Otaiba.