Nations to boost aid to Syria rebels until Assad goes 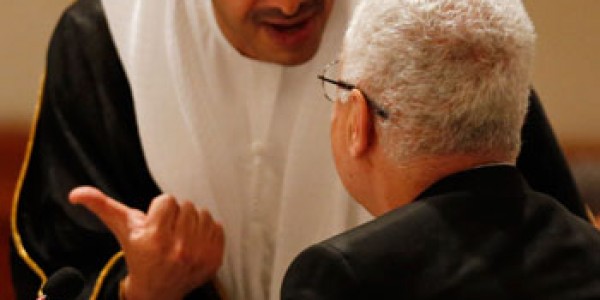 Nations to boost aid to Syria rebels until Assad goes (AFP) / 23 May 2013 World powers urged Syrian President Bashar Al Assad to commit to peace, but warned on Thursday that if he fails to negotiate a political transition they would boost their backing of the opposition. The stark warning came from a meeting of the Friends of Syria group, which held talks on Wednesday in Amman to try to agree the contours of a peace conference to end the war. The conflict, now in its third year, has claimed some 94,000 lives. The United States and Russia have backed opposite sides in the conflict, but hope to bring the warring sides together at the conference next month, although a date and venue remain unclear. “We would call on President Assad to exhibit the same commitment to trying to find peace in his own country. That is critical,” US Secretary of State Kerry told a joint press conference with Jordanian Foreign Minister Nasser Judeh ahead of the talks. After meeting late into the night, the 11 ministers from the Friends of Syria group laid out a grim choice for Assad: he and his associates with “blood on their hands” had no role to play in the future of Syria, they said. If the regime refused to negotiate a transitional government, then they would boost their support for the opposition, they said. “The ministers also emphasized that until such time as the Geneva meeting produces a transitional government, they will further increase their support for the opposition and take all other steps as necessary,” a final statement said. A US official would not confirm whether that meant Washington would finally overcome its reluctance to send arms to the rebels. “All of the countries agreed that the support to the opposition is a tactic that works towards achieving a strategy of securing a negotiated political settlement,” the official said, asking not to be named. “We’ve long said that it’s important to change (Assad’s) calculation, and in order to change his calculation the balance of power on the ground must change. “So, the communique states we will increase our support to the opposition and the goal of that is to change the balance on the ground.” The ministers met for over two hours, first behind closed doors at an Amman hotel, then holding three hours of talks with the interim president of the Syrian National Coalition, George Sabra, and two other rebel leaders. The communique denounced ethnic cleansing, “identified as the corner stone of a political solution the formation of a transitional governing body through mutual consent.” In another sign of the growing impatience with Assad, French President Francois Hollande and British Prime Minister David Cameron said they would seek European support for their proposal to arm the Syrian opposition. “We are prepared to lift the arms embargo further so that the opposition can present themselves as the legitimate voice of the Syrian people,” Cameron told reporters during a brief stopover in Paris. The foreign ministers of Britain, Egypt, France, Germany, Italy, Jordan, Qatar, Saudi Arabia, Turkey, the United Arab Emirates and the United States attended the meeting in the Jordanian capital. Qatari Foreign Minister Hassem bin Jassem Al Thani unleashed a furious tirade against Assad, accusing him of “continuing to kill his people with outside help and using banned weapons. “Syria is totally destroyed, and all so that the regime can stay in place. We are with you and we will stay with you,” he told Sabra. All eyes are likely now to turn to Istanbul where the opposition is to start meetings on electing a new president, expand its “parliament” and begin the process of choosing an interim government. Neither the opposition nor Damascus has yet publicly said who they would send to attend the peace conference, likely to be held in June. But US officials said Washington had been told by third parties that the Syrian regime delegation would be led by Prime Minister Wael Al Halqi. US ambassador to Syria Robert Ford was Thursday on his way back to Istanbul for meetings with the opposition. In Syria itself, regime forces and their allies pushed to retake the key rebel stronghold of Qusayr in central Homs province. The Syrian opposition urged fighters across the country to “rush to the rescue” of Qusayr and appealed to the international community to set up a humanitarian corridor to the embattled town. French Foreign Minister Laurent Fabius also revealed France was now ready to call for the military wing of Hezbollah to be blacklisted by the European Union as a terrorist organisation because of its intervention in Syria. Taylor Scott International