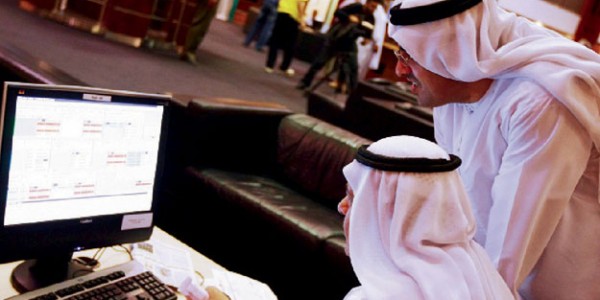 MSCI upgrades UAE, Qatar to emerging markets Muzaffar Rizvi / 12 June 2013 The UAE and Qatar finally elevated to emerging market by the global index compiler MSCI that will boost investor sentiment and attract foreign investment inflows into the region. With this long-awaited MSCI up-gradation, the UAE and Qatari shares are expected to attract approximately one per cent, or up to $500 million, of total global investments in the emerging markets space annually only after the reclassification takes effect in May next year. However, the two Gulf States will see a gradual surge in foreign investment inflows of up to $3 billion over a period of time. An investor monitors electronic stock boards at the Dubai Financial Market in Dubai. KT photo by Rahul Gajjar “The reclassifications of the MSCI Qatar and MSCI UAE Indices will coincide with the May 2014 Semi Annual Index Review while the reclassifications of the MSCI Greece and MSCI Morocco Indices will coincide with the November 2013 Semi Annual Index Review,” MSCI said in its yearly market classification report, posted on its website early Wednesday. Speaking on a conference call, MSCI managing director and global head of index research Remy Briand said Qatar and UAE stock markets would have a greater share in MSCI Emerging Market Index as compared to Greece, which downgraded from developed market. “Qatar and UAE will have a 0.45 per cent and 0.45 weight in the MSCI Emerging Market Index compared to Greece’s 0.3 per cent,” he said. The New York-based Morgan Stanley Capital International (MSCI) currently has its country indices for both UAE and Qatar. In the UAE Index, the developer includes stocks such as Emaar Properties, DP World, ADCB and NBAD, but it is still unclear that all of these shares will be included in the Emerging Market Index. Dubai Financial Market (DFM) was first to welcome the MSCI annual market classification review to upgrade the MSCI UAE Index to emerging markets status. Essa Kazim, managing director and chief executive, Dubai Financial Market, said: “This significant step evidently demonstrates international institutions’ recognition of DFM’s pivotal role over the last three years to further enhance the UAE market infrastructure in collaboration with the Securities and Commodities Authority of UAE (SCA). This development is overdue in light of the market infrastructure improvements made and ticking of all upgrade requirements long time ago.” A media statement by the Dubai Financial Market (DFM) said the DFM is amongst the best performing exchanges globally since the beginning of the year with its market index up by almost 50 per cent to rank amongst the best performing exchanges. The average daily trading value increased 67 per cent to Dh460 million compared to Dh278.2 million in the corresponding period of 2012, the statement said. “We are delighted to see the UAE market upgraded to emerging markets status, which reflects international investors’ confidence in our markets and their satisfaction with what we have accomplished,” Kazim said. MSCI said international institutional investors recognised the improvements made by the UAE regulator and bourses with respect to the delivery versus payment model. “The majority of market participants have expressed no major concerns over the safekeeping of investors’ assets and are starting to move away from the dual account structure,” MSCI said. For Qatar, the index provider said it welcomed the progress made by the authorities to raise the limits on foreign ownership of companies listed on the Doha-based exchange, but added that the current foreign ownership limits were still low by emerging market standards and the Qatari authorities should actively continue to increase them above 25 per cent in order to mitigate potential issues arising from increasing foreign capital inflows, MSCI said. “The MSCI decision to upgrade Qatar and UAE from frontier markets to emerging markets, with effect May 2014, reflects a growing realisation of how far these economies and their financial markets have developed in recent years,” said Sam Vecht, BlackRock’s head of the emerging markets specialist team and portfolio manager of the Frontiers Investment Trust. Equity index provider also said it is closely monitoring the situation in Egypt and in particular the country’s foreign exchange market. “MSCI may be forced to launch a public consultation on a potential exclusion of Egypt from the emerging markets index if the situation to worsen in the coming months.” MSCI further said it would reclassify Morocco and Greece as frontier market and emerging markets, respectively, in a move to lower their markets status. However, it maintained the emerging market status of Korea and Taiwan and will review their potential reclassification to developed markets as part of the 2014 annual market classification review. MSCI also initiating the review of China A-shares for potential inclusion in the MSCI Emerging Market Index. – muzaffarrizvi@khaleejjtimes.com Taylor Scott International