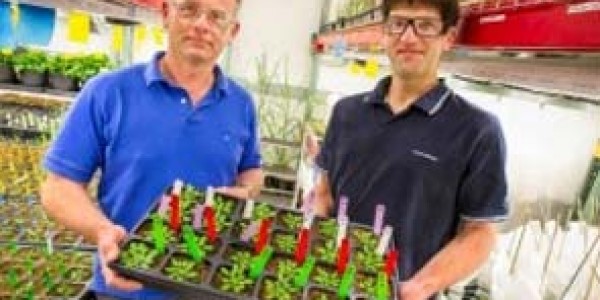 Monday, 15 April 2013 JBEI’s Henrik Scheller (left) and Dominque Loque, shown here with Arabidopsis plants, are engineering plant cell walls to make the sugars within more accessible. (Photo by Roy Kaltschmidt, Berkeley Lab) The Joint BioEnergy Institute has received a five-year renewal of funding from the United States Department of Energy. Under the terms of the renewal, J.B.E.I. will be funded by up to $25 million annually through 2018. The J.B.E.I. is a Bioenergy Research Center created by the D.O.E. to conduct research on the development of advanced, next-generation biofuel. Originally established in 2008, it was backed by a $125 million grant for the first five-year period. The J.B.E.I. is led by the Lawrence Berkeley National Laboratory but also includes researchers from the Sandia National Laboratory, the University of California campuses of Berkeley and Davis, the Carnegie Institution for Science, the Pacific Northwest National Laboratory, and the Lawrence Livermore National Laboratory. J.B.E.I. research, for the past five years, has focused on developing advanced biofuels from lignocellulosic biomass, which uses grasses and other non-food crops and agricultural waste to create alternatives to fossil fuels. Using synthetic biology techniques, the J.B.E.I. researchers seek to engineer plants to enable easy extraction of plant sugars from biomass and to increase the sugar yields of energy crops. Softer walls, less sugar A recent example of the work done in J.B.E.I. would be a genetically engineered Arabidopsis plant that produces less xylan in its cell walls (see related story ) and another with less lignin then the natural plant with more extractable sugars for the biofuel process. “Through the tools of synthetic biology, we have engineered healthy plants whose lignocellulosic biomass can more easily be broken down into simple sugars for biofuels,” said Dominique Loque, who directs the cell wall engineering program for J.B.E.I.’s Feedstocks Division. Lignocellulosic biomass is one of the most abundant organic materials found on Earth. It has been used as animal feed and in the creation of paper. Now scientists are focused on using lignocelluloses as a source of sugars for advanced biofuels. Lignocellulose makes up the plants cell walls. In order to get to the fermentable sugars, the lignocelluloses need to be broken down, a process that can be difficult, expensive and time consuming. Researchers have been searching for a way to reduce lignin, a major polymer in plant cell walls, to enable easier sugar extraction. Most efforts have however resulted in sever biomass yield reduction or a loss of integrity in the plant’s vessels, a key tissue for water and nutrient distribution. What Mr. Loque and his colleagues did was rewire the regulation of lignin biosynthesis and create an artificial positive feedback loop to enhance secondary cell wall biosynthesis in specific tissue. “When we applied our APFL to Arabidopsis plants engineered so that lignin biosynthesis is disconnected from the fiber secondary cell wall regulatory network, we maintained the integrity of the vessels and were able to produce healthy plants with reduced lignin and enhanced polysaccharide deposition in the cell walls,” said Mr. Loque. The researchers believe that this technique can also be implemented to other plant species for biofuel crops with less lignin and more sugar. Enhancing national security, increasing green jobs Aside from the J.B.E.I., the Energy Department also funds two other Bioenergy Research Centers, the BioEnergy Research Center led by Oak Ridge National Laboratory and the Great Lakes Bioenergy Research Center led by the University of Wisconsin-Madison. According to Energy Secretary Steven Chu, the establishment and support of these centers by the administration is intended to help the biofuels industry move forward to decrease the country’s dependence on foreign oil, as well as generate new clean energy jobs. As with the J.B.E.I., both the B.E.S.C. and the G.L.B.R.C. will be funded worth $25 million for the next five years. Emphasis during these years will be on bringing the new methods and discoveries in the centers to maturity to enable their transition into the marketplace. – K.R. Jabuena