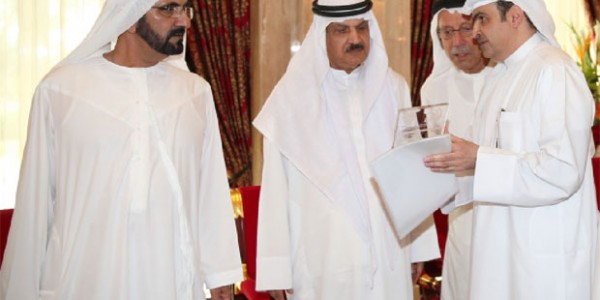 Mohammed receives Middle East City of the Future award (WAM) / 24 April 2013 His Highness Shaikh Mohammed bin Rashid Al Maktoum, Vice-President and Prime Minister of the UAE and Ruler of Dubai, has received the Middle East City of the Future award, as awarded by fDi Magazine, to Dubai which retained the title for the third year in a row and remains by far the top destination in the Middle East for investors thanks to its business-friendly environment, infrastructure and high competitiveness. fDi Magazine is the flagship publication for the fDi Intelligence portfolio and is published by The Financial Times Ltd. Shaikh Mohammed received the award from the Director General of Dubai’s Department of Economic Development (DED), Sami Al Qamzi, who was accompanied by the CEO of DED’s Foreign Investment Office, Fahad Al Gergawi. Shaikh Mohammed receives the Middle East City of the Future award for Dubai from Sami Al Qamzi. — Wam He congratulated the DED team on the achievement which reflects the interest of the international media, financial and trade institutions in the achievements made by the country. He emphasised that “international and regional awards and certificates won by Dubai as the city of felicity and successful investment reflect international interest in our civilised achievements. We are pleased by this international interest, welcome it and are proud of our state, our people and the potentials of our creative youth.” In presence were Shaikh Maktoum bin Mohammed bin Rashid Al Maktoum, Deputy Ruler of Dubai and Shaikh Ahmed bin Saeed Al Maktoum, Chairman of Dubai Aviation Authority and Chairman of Emirates Group. Later, Shaikh Mohammed hosted a lunch banquet for Shaikhs, ministers, dignitaries and heads of government and economic departments.   Taylor Scott International