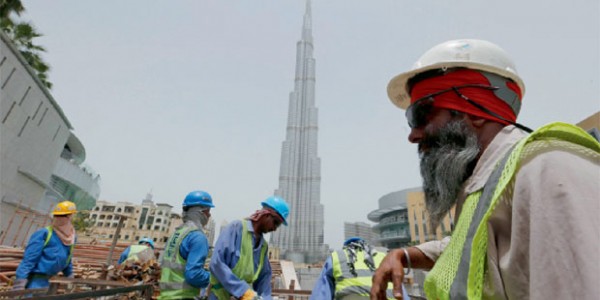 Midday break rule from tomorrow 13 June 2013 Labour Ministry assistant undersecretary for inspection affairs, Maher Hamad Al Obad, has underlined the keen interest of the government in providing all means of living for labourers, improving their conditions and maintaining their safety, which reflects on the stability of the labour market. He said this is made through adoption of initiatives and enactment of laws that maintain human rights, safeguarding their dignity and securing their requirements for a decent life for them, according to the tenets of Islam and the laws and norms issued by international organisations. Al Obad made the remarks at a speech at a reception held here on Thursday to mark the launch of the mandatory midday break rule for labourers which will come into force on Saturday. The noon work ban will run for three months. The break will be from 12.30pm until 3pm. Employers have been asked to provide shaded areas for their workers during the break time. In case a worker works for more than eight hours a day, the extra working hours will be treated as overtime, and he will be paid for it as per the provisions of the Federal Law No 8 of 1980 on regularising labour relations. The three-month midday break rule will end on September 15. Labourers must not work at all during the banned hours especially if he works in the open. Works which must continue non-stop for technical reasons are exempt from the ban, but employers are required to provide all facilities that cater to the health and safety of workers including first aid, re-hydration/electrolyte solutions and cold water. A list of worker exemptions will also be issued by the ministry. The rule makes it binding on the employers to publish, in a conspicuous place at the workplace, a schedule of the daily working hours as per the rules, and should be written in Arabic to facilitate being read and reviewed by the labour inspectors while conducting surveillance visits, and also in a language that is understood by the workers. It also calls for providing suitable protection facilities to protect workers from risks of occupational injuries and diseases, which might happen during working hours. Other measures include risks of fire which might result from using work tools and following all other methods of protection stipulated in the labour law and the executing ministerial decrees. Companies who break the midday break rule will face penalties. Offenders will have the classification of their firms downgraded by the ministry, and will be fined Dh15,000 for each offence. news@khaleejtimes.com   Taylor Scott International